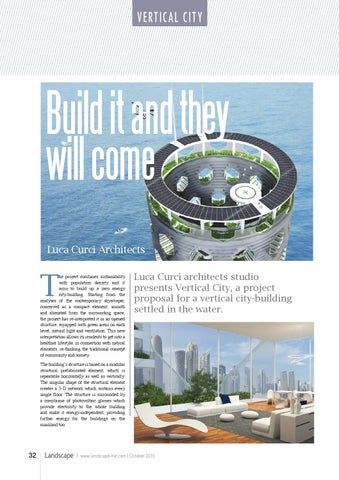 Build it and they will come Luca Curci Architects

he project combines sustainability with population density and it aims to build up a zero energy city-building. Starting from the analyses of the contemporary skyscraper, conceived as a compact element, smooth and alienated from the surrounding space, the project has re-interpreted it in an opened structure, equipped with green areas on each level, natural light and ventilation. This new interpretation allows its residents to get into a healthier lifestyle, in connection with natural elements, re-thinking the traditional concept of community and society.

The buildingâ&#x20AC;&#x2122;s structure is based on a modular structural prefabricated element, which is repeatable horizontally as well as vertically. The singular shape of the structural element creates a 3-D network which sustains every single floor. The structure is surrounded by a membrane of photovoltaic glasses which provide electricity to the whole building and make it energy-independent, providing further energy for the buildings on the mainland too.