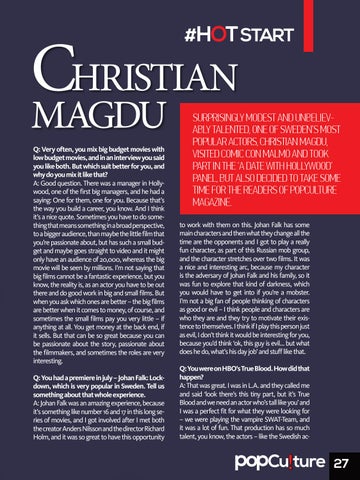 CHRISTIAN MAGDU Q: Very often, you mix big budget movies with low budget movies, and in an interview you said you like both. But which suit better for you, and why do you mix it like that? A: Good question. There was a manager in Hollywood, one of the first big managers, and he had a saying: One for them, one for you. Because that’s the way you build a career, you know. And I think it’s a nice quote. Sometimes you have to do something that means something in a broad perspective, to a bigger audience, than maybe the little film that you’re passionate about, but has such a small budget and maybe goes straight to video and it might only have an audience of 20,000, whereas the big movie will be seen by millions. I’m not saying that big films cannot be a fantastic experience, but you know, the reality is, as an actor you have to be out there and do good work in big and small films. But when you ask which ones are better – the big films are better when it comes to money, of course, and sometimes the small films pay you very little – if anything at all. You get money at the back end, if it sells. But that can be so great because you can be passionate about the story, passionate about the filmmakers, and sometimes the roles are very interesting. Q: You had a premiere in july – Johan Falk: Lockdown, which is very popular in Sweden. Tell us something about that whole experience. A: Johan Falk was an amazing experience, because it’s something like number 16 and 17 in this long series of movies, and I got involved after I met both the creator Anders Nilsson and the director Richard Holm, and it was so great to have this opportunity

SURPRISINGLY MODEST AND UNBELIEVABLY TALENTED, ONE OF SWEDEN’S MOST POPULAR ACTORS, CHRISTIAN MAGDU, VISITED COMIC CON MALMÖ AND TOOK PART IN THE ‘A DATE WITH HOLLYWOOD’ PANEL, BUT ALSO DECIDED TO TAKE SOME TIME FOR THE READERS OF POPCULTURE MAGAZINE.

to work with them on this. Johan Falk has some main characters and then what they change all the time are the opponents and I got to play a really fun character, as part of this Russian mob group, and the character stretches over two films. It was a nice and interesting arc, because my character is the adversary of Johan Falk and his family, so it was fun to explore that kind of darkness, which you would have to get into if you’re a mobster. I’m not a big fan of people thinking of characters as good or evil – I think people and characters are who they are and they try to motivate their existence to themselves. I think if I play this person just as evil, I don’t think it would be interesting for you, because you’d think ‘ok, this guy is evil… but what does he do, what’s his day job’ and stuff like that. Q: You were on HBO’s True Blood. How did that happen? A: That was great. I was in L.A. and they called me and said ‘look there’s this tiny part, but it’s True Blood and we need an actor who’s tall like you’ and I was a perfect fit for what they were looking for – we were playing the vampire SWAT-Team, and it was a lot of fun. That production has so much talent, you know, the actors – like the Swedish ac-

Are you expat in Scandinavia, who is into movies, TV shows, books, comics, games and music? Need to know every single detail about popular culture in Denmark, Norway and Sweden? Download FREE PopCulture Magazine application & flip through monthly digital magazine. Available for Android, iPad, iPhone & Desktop. 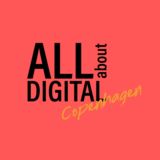