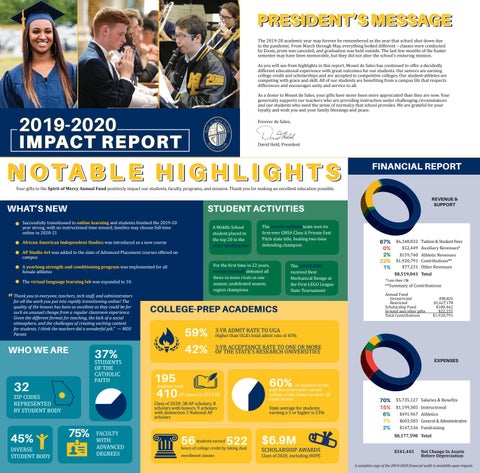 PRESIDENT’S PRESIDENT’S MESSAGE MESSAGE The 2019-20 academic year may forever be remembered as the year that school shut down due to the pandemic. From March through May, everything looked different – classes were conducted by Zoom, prom was canceled, and graduation was held outside. The last few months of the Easter semester may have been memorable, but they did not alter the school’s enduring mission.

As you will see from highlights in this report, Mount de Sales has continued to offer a decidedly different educational experience with great outcomes for our students. Our seniors are earning college credit and scholarships and are accepted to competitive colleges. Our student-athletes are competing with grace and skill. All of our students are benefiting from a campus life that respects differences and encourages unity and service to all.

As a donor to Mount de Sales, your gifts have never been more appreciated than they are now. Your generosity supports our teachers who are providing instruction under challenging circumstances and our students who need the sense of normalcy that school provides. We are grateful for your loyalty and wish you and your family blessings and peace.

Your gifts to the Spirit of Mercy Annual Fund positively impact our students, faculty, programs, and mission. Thank you for making an excellent education possible.

Successfully transitioned to online learning and students finished the 2019-20 year strong, with no instructional time missed; families may choose full-time online in 2020-21

African American Independent Studies was introduced as a new course

AP Studio Art was added to the slate of Advanced Placement courses offered on campus The virtual language learning lab was expanded to 10.

Thank you to everyone, teachers, tech staff, and administrators for all the work you put into rapidly transitioning online! The quality of the lessons has been as excellent as they could be for such an unusual change from a regular classroom experience. Given the different format for teaching, the lack of a social atmosphere, and the challenges of creating exciting content for students, I think the teachers did a wonderful job.” — MDS Parent

STUDENTS OF THE CATHOLIC FAITH

For the first time in 22 years, varsity football defeated all three in-town rivals in one season; undefeated season; region champions

State average for students earning a 3 or higher is 23%

Net Change In Assets Before Depreciation

A complete copy of the 2019-2020 financial audit is available upon request. 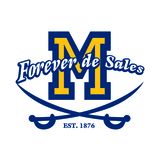