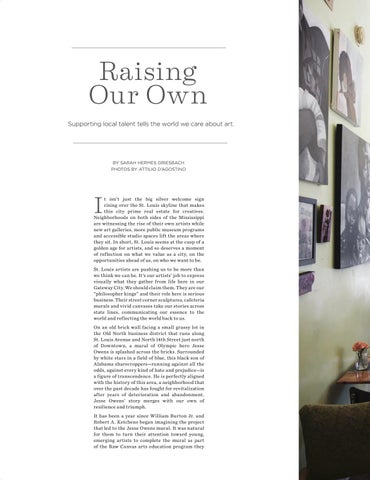 Raising Our Own Supporting local talent tells the world we care about art.

t isn’t just the big silver welcome sign rising over the St. Louis skyline that makes this city prime real estate for creatives. Neighborhoods on both sides of the Mississippi are witnessing the rise of their own artists while new art galleries, more public museum programs and accessible studio spaces lift the areas where they sit. In short, St. Louis seems at the cusp of a golden age for artists, and so deserves a moment of reflection on what we value as a city, on the opportunities ahead of us, on who we want to be. St. Louis artists are pushing us to be more than we think we can be. It’s our artists’ job to express visually what they gather from life here in our Gateway City. We should claim them. They are our “philosopher kings” and their role here is serious business. Their street corner sculptures, cafeteria murals and vivid canvases take our stories across state lines, communicating our essence to the world and reflecting the world back to us. On an old brick wall facing a small grassy lot in the Old North business district that runs along St. Louis Avenue and North 14th Street just north of Downtown, a mural of Olympic hero Jesse Owens is splashed across the bricks. Surrounded by white stars in a field of blue, this black son of Alabama sharecroppers—running against all the odds, against every kind of hate and prejudice—is a figure of transcendence. He is perfectly aligned with the history of this area, a neighborhood that over the past decade has fought for revitalization after years of deterioration and abandonment. Jesse Owens’ story merges with our own of resilience and triumph. It has been a year since William Burton Jr. and Robert A. Ketchens began imagining the project that led to the Jesse Owens mural. It was natural for them to turn their attention toward young, emerging artists to complete the mural as part of the Raw Canvas arts education program they