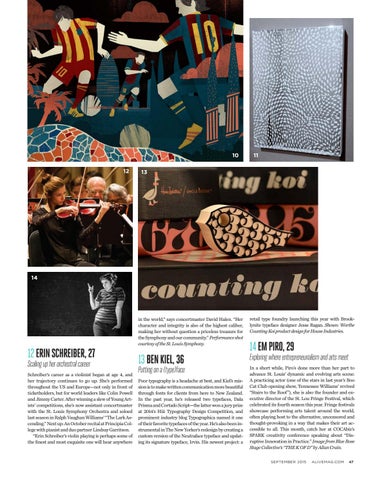 Schreiber’s career as a violinist began at age 4, and her trajectory continues to go up: She’s performed throughout the US and Europe—not only in front of ticketholders, but for world leaders like Colin Powell and Jimmy Carter. After winning a slew of Young Artists’ competitions, she’s now assistant concertmaster with the St. Louis Symphony Orchestra and soloed last season in Ralph Vaughan Williams’ “The Lark Ascending.” Next up: An October recital at Principia College with pianist and duo partner Lindsay Garritson. “Erin Schreiber’s violin playing is perhaps some of the finest and most exquisite one will hear anywhere

in the world,” says concertmaster David Halen. “Her character and integrity is also of the highest caliber, making her without question a priceless treasure for the Symphony and our community.” Performance shot courtesy of the St. Louis Symphony.

Putting on a (type)face Poor typography is a headache at best, and Kiel’s mission is to make written communication more beautiful through fonts for clients from here to New Zealand. In the past year, he’s released two typefaces, Dala Prisma and Cortado Script—the latter won a jury prize at 2014’s Hiii Typography Design Competition, and prominent industry blog Typographica named it one of their favorite typefaces of the year. He’s also been instrumental in The New Yorker’s redesign by creating a custom version of the Neutraface typeface and updating its signature typeface, Irvin. His newest project: a

Exploring where entrepreneurialism and arts meet In a short while, Piro’s done more than her part to advance St. Louis’ dynamic and evolving arts scene: A practicing actor (one of the stars in last year’s Boo Cat Club opening show, Tennessee Williams’ revived “Stairs to the Roof”), she is also the founder and executive director of the St. Lou Fringe Festival, which celebrated its fourth season this year. Fringe festivals showcase performing arts talent around the world, often playing host to the alternative, uncensored and thought-provoking in a way that makes their art accessible to all. This month, catch her at COCAbiz’s SPARK creativity conference speaking about “Disruptive Innovation in Practice.” Image from Blue Rose Stage Collective’s “THE K OF D” by Allan Crain. SEPTEMBER 2015