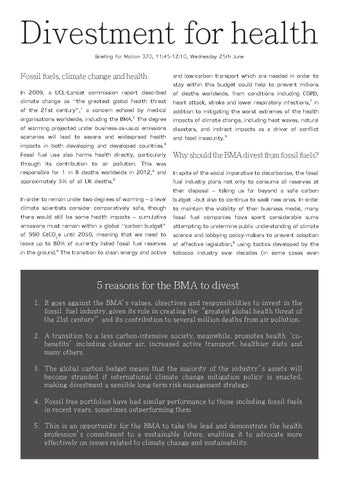 and low-carbon transport which are needed in order to stay within this budget could help to prevent millions of deaths worldwide, from conditions including COPD, heart attack, stroke and lower respiratory infections,7 in addition to mitigating the worst extremes of the health impacts of climate change, including heat waves, natural disasters, and indirect impacts as a driver of conflict and food insecurity.3

In 2009, a UCL-Lancet commission report described climate change as “the greatest global health threat of the 21st century”,1 a concern echoed by medical organisations worldwide, including the BMA.2 The degree of warming projected under business-as-usual emissions scenarios will lead to severe and widespread health impacts in both developing and developed countries.3 Fossil fuel use also harms health directly, particularly Why should the BMA divest from fossil fuels? through its contribution to air pollution. This was responsible for 1 in 8 deaths worldwide in 2012,4 and In spite of the social imperative to decarbonise, the fossil approximately 5% of all UK deaths.5 fuel industry plans not only to consume all reserves at their disposal – taking us far beyond a safe carbon In order to remain under two degrees of warming – a level budget –but also to continue to seek new ones. In order climate scientists consider comparatively safe, though to maintain the viability of their business model, many there would still be some health impacts – cumulative fossil fuel companies have spent considerable sums emissions must remain within a global “carbon budget” attempting to undermine public understanding of climate of 990 GtCO2e until 2050, meaning that we need to science and lobbying policy-makers to prevent adoption leave up to 80% of currently listed fossil fuel reserves of effective legislation,8 using tactics developed by the in the ground.6 The transition to clean energy and active tobacco industry over decades (in some cases even

5 reasons for the BMA to divest 1. It goes against the BMA’s values, objectives and responsibilities to invest in the fossil fuel industry, given its role in creating the “greatest global health threat of the 21st century” and its contribution to several million deaths from air pollution. 2. A transition to a less carbon-intensive society, meanwhile, promotes health ‘cobenefits’ including cleaner air, increased active transport, healthier diets and many others. 3. The global carbon budget means that the majority of the industry’s assets will become stranded if international climate change mitigation policy is enacted, making divestment a sensible long-term risk management strategy. 4. Fossil free portfolios have had similar performance to those including fossil fuels in recent years, sometimes outperforming them. 5. This is an opportunity for the BMA to take the lead and demonstrate the health profession’s commitment to a sustainable future, enabling it to advocate more effectively on issues related to climate change and sustainability.

employing the same organisations).9 Shareholders’ and their investments away from fossil fuel companies. customers’ continued investment in and Divestment from the fossil fuel industry by a respected support of these companies, along medical institution like the BMA would send a with inadequate public policy, clear public signal about the health effects of licenses such a strategy climate change, and would strengthen the and its damaging medical profession’s ability to advocate consequences. for a transition to a healthier and more sustainable economy. Divestment involves systematically selling The financial case for off holdings in divestment Amount spent by the 200 biggest coal, oil and gas companies on finding and developing companies deemed new fossil fuel reserves in 2012 to act unethically Another reason to divest from fossil or in a way that runs fuel companies is that such investments counter to the investor’s may be systematically overvalued, since goals – as with the BMA’s the enactment of adequate climate policy – divestment from tobacco in the which is becoming more likely as climate impacts 1980s. In the context of the growing become increasingly severe – would severely threat posed by unmitigated climate change, calls threaten the industry’s market value. In for fossil fuel divestment, and re-investment in essence, to continue to invest in fossil clean alternatives, have been made by influential Total global renewable fuels is to bet against substantive action energy investment figures including: Archbishop Desmond Tutu;10 Dr on climate change.14 in 2012 Jim Kim, President of the World Bank;11 Christiana Figueres, Executive Secretary of the UNFCCC;12 and, Additionally, fossil-free portfolios perform as most recently, Sir Sabaratnam Arulkumaran, President well as benchmarks which include fossil fuels, with similar of the BMA.13 or lower levels of risk.15 Divestment also creates an opportunity to increase investment in the fast-growing Many institutions – including universities, churches renewable energy sector, building energy efficiency and/ and pension funds – have already started to move or on-site energy generation.16

Brief précis argument in favour of health sector divestment from fossil fuels, in preparation for the motion on divestment to be discussed at the BMA's ARM, 25th June 2014 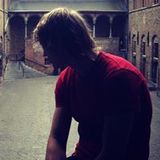