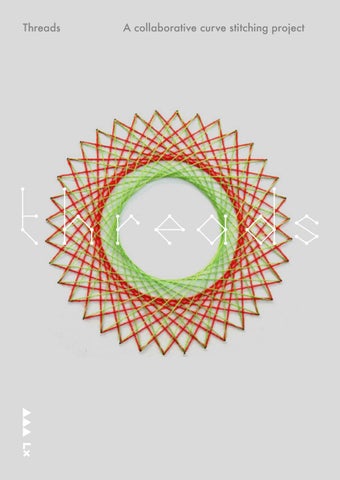 The Threads Project began in September 2015 with over eighty people in Leeds learning to curve stitch. Fifteen then committed to developing their technique and becoming Threads artists, creating work together for the exhibition at Colours May Vary in June 2016.

“The Threads artists and I made the work in small groups and recorded our conversations. Designer Lee Goater and I then took excerpts of these conversations and represented them typographically in the exhibition. We have also represented things we noticed while working together: some of the work is unfinished, as were some of the conversations; we were generally much more comfortable with silences so there are gaps and pauses in the work and in the words; small pieces of work have been brought together in quilt patterns, traditionally made in similar social groups; we talk over each other much of the time, but with positive and supportive comments that hold the threads of conversation together and sometimes bridge the gaps caused by a particularly tricky bit or a frustrating knot. This is very much a collaborative project, the Threads artists have made a journey from students to artists and I started as a teacher and became a curator. It has been wonderful to see how the artists took the basics of the technique and developed it in many ways I hadn’t envisaged.” Alison McIntyre

Alison is a self-taught artist and has been practising since 1997. She comes from a drawing and painting background, rather than textiles and sewing, so was drawn to curve stitching through a love of geometry, pattern and design. She sells her own curve stitch pictures and cards through a number of stockists across the UK and online. The Threads Project grew out of this commercial practice and from Alison’s desire to use the techniques in the community work she does in parallel with it.

• L ee Goater for going above and beyond •W  est Yorkshire Playhouse, Leeds Central Library & Union 105 for workshop space •E  veryone at Unlimited Theatre for help and support • T he many Leeds community groups and organisations who helped with recruitment and exhibition publicity •A  ll the Threads participants, collaborators and volunteers •B  ecky and Andy at Colours May Vary for exhibition space and being brilliant •A  imee Grundell for box building perfection •S  lung Low for the use of their van •E  veryone at Sunnybank Mills for support and enthusiasm • T om (aka Dad), for help with making things and fixing things to other things

Between October and December 2015 Alison taught over eighty people the basics of curve stitching. There were four free public workshops that served as taster sessions and Alison also worked with a number of specific groups through the Arts and Minds Network, Heydays, East Street Arts Community Learning and the Neighbourhood Network Scheme. It was very important to be able to offer opportunities to learn for free, so funding from Leeds Inspired and support from Heydays, Arts and Minds and East Street Arts was invaluable to ensure that there were no financial barriers to participation. Workshop participants were given materials, guidance and encouragement, including a blog and a You Tube channel with instructional videos, to help them practice their new skills over Christmas and into the New Year. The participants were then contacted towards the end of January to see who wanted to attend further sessions and commit to making work for the exhibition. Fifteen people opted to continue to this second thread of the project.

Fifteen people became Threads artists, committed to making work for the exhibition. They were then split into four smaller groups to make it easier to have just one conversation at a time. Meanwhile, Alisonâ&#x20AC;&#x2122;s role was becoming more curator, rather than artist or teacher. She was giving a great deal of thought to how the finished work would be displayed in the exhibition and how it would represent the ideas at the core of the project as well as showcasing the work that came out of the making sessions. After trying out a number of large-scale ideas, Alison asked the groups to make small pieces of work, similar to those that had made in the taster sessions. The groups were comfortable with this scale and technique so the conversation flowed easily and wasnâ&#x20AC;&#x2122;t only concerned with what was being made.

These smaller pieces were made on squares, a bit like individual quilt pieces, so that Alison could then bring them all together in the complete and partial quilt patterns you can see on the wall panels. We loved the synergy between this and traditional quilt and textile making, also often done socially in groups like ours. Some of the artists went on to contribute to or develop their own designs on larger pieces of work, which are displayed on the other side of the wall panels. Making the work together for the exhibition was an enormously satisfying and enjoyable experience for everyone involved, with many in the groups saying how good it was for their mental health and general wellbeing to meet new people, to learn a new skill and to allow themselves such a long about of time to do something without interruption.

“The sessions have been FANTASTIC!!! I love curve stitching now, and am so pleased that I came. It has all been so much fun, really relaxing and therapeutic too, as well as producing some beautiful work and meeting some lovely people. Thank you Alison, for your inspiration, patience, calmness and for sharing your skills with us all. It has done me so much good. I am really looking forward to our exhibition, and am proud to be a part of it.” Carole “Great to be part of something that was continuously evolving. The craft was out of my comfort zone so good to be working on something quite new.” Lis “The best part for me was doing it as part of a group. This gives me encouragement to keep doing it and it’s nice to chat and exchange ideas. Other people think of things I would never have thought of myself.” Edna

“I particularly enjoyed the fact that learning curve stitching has given me a creative outlet, something artistic that I can do and feel proud of the results, despite the fact that I am inherently not an artistic person! I met some interesting people with interesting lives and stories. It was nice to sit and spend time with people that I had never met before, and particularly of different ages, people different from the social groups that I would normally spend time with. It was inspiring to spend time with Alison, who is obviously a very creative and talented artist, but without any of the pretensions that might sometimes come with that.” Gwyneth “The longer I worked with this brilliant group of people the more I trusted their creative abilities and the process we were working through. I’m very proud of what we have achieved together.” Alison 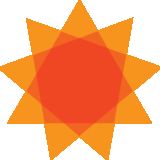 A celebration of the Threads Project, a collaborative curve stitch project by Alison McIntyre and Lee Goater.

A celebration of the Threads Project, a collaborative curve stitch project by Alison McIntyre and Lee Goater.