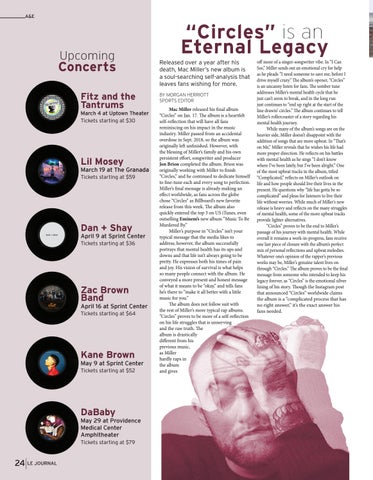 March 19 at The Granada Tickets starting at $59

May 9 at Sprint Center Tickets starting at $52

May 29 at Providence Medical Center Amphitheater Tickets starting at $79

“Circles” is an Eternal Legacy Released over a year after his death, Mac Miller’s new album is a soul-searching self-analysis that leaves fans wishing for more. BY MORGAN HERRIOTT SPORTS EDITOR

Mac Miller released his final album “Circles” on Jan. 17. The album is a heartfelt self-reflection that will have all fans reminiscing on his impact in the music industry. Miller passed from an accidental overdose in Sept. 2018, so the album was originally left unfinished. However, with the blessing of Miller’s family and his own persistent effort, songwriter and producer Jon Brion completed the album. Brion was originally working with Miller to finish “Circles,” and he continued to dedicate himself to fine-tune each and every song to perfection. Miller’s final message is already making an effect worldwide, as fans across the globe chose “Circles” as Billboard’s new favorite release from this week. The album also quickly entered the top 3 on US iTunes, even outselling Eminem’s new album “Music To Be Murdered By.” Miller’s purpose in “Circles” isn’t your typical message that the media likes to address; however, the album successfully portrays that mental health has its ups and downs and that life isn’t always going to be pretty. He expresses both his times of pain and joy. His vision of survival is what helps so many people connect with the album. He conveyed a more present and honest message of what it means to be “okay,” and tells fans he’s there to “make it all better with a little music for you.” The album does not follow suit with the rest of Miller’s more typical rap albums. “Circles” proves to be more of a self-reflection on his life struggles that is unnerving and the raw truth. The album is drastically different from his previous music, as Miller hardly raps in the album and gives

off more of a singer-songwriter vibe. In “I Can See,” Miller sends out an emotional cry for help as he pleads “I need someone to save me, before I drive myself crazy.” The album’s opener, “Circles” is an uncanny listen for fans. The somber tune addresses Miller’s mental health cycle that he just can’t seem to break, and in the long run just continues to “end up right at the start of the line drawin’ circles.” The album continues to tell Miller’s rollercoaster of a story regarding his mental health journey. While many of the album’s songs are on the heavier side, Miller doesn’t disappoint with the addition of songs that are more upbeat. In “That’s on Me,” Miller reveals that he wishes his life had more proper direction. He reflects on his battles with mental health as he sings “I don’t know where I’ve been lately, but I’ve been alright.” One of the most upbeat tracks in the album, titled “Complicated,” reflects on Miller’s outlook on life and how people should live their lives in the present. He questions why “life has gotta be so complicated” and pleas for listeners to live their life without worries. While much of Miller’s new release is heavy and reflects on the many struggles of mental health, some of the more upbeat tracks provide lighter alternatives. “Circles” proves to be the end to Miller’s passage of his journey with mental health. While overall it remains a work-in-progress, fans receive one last piece of closure with the album’s perfect mix of personal reflections and upbeat melodies. Whatever one’s opinion of the rapper’s previous works may be, Miller’s genuine talent lives on through “Circles.” The album proves to be the final message from someone who intended to keep his legacy forever, as “Circles” is the emotional silver lining of his story. Though the Instagram post that announced “Circles” worldwide claims the album is a “complicated process that has no right answer,” it’s the exact answer his fans needed.