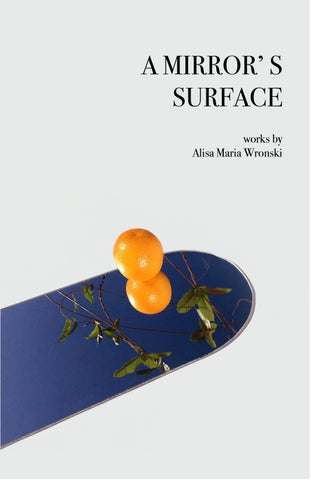 I am inspired by my surroundings, everyday things I encounter that can easily be overlooked as one goes on with their day. I included images of some inspiration here. Alisa Maria

If a tree falls in the forest and nobody is around to hear it, does it still make a sound?

A mirror’s entire surface is continually changing, and what it looks like is solely dependent on what it is reflecting. One cannot describe a mirror’s surface without describing the properties of the objects we see in it. That surface looks unique in each viewer’s eyes, even when two people look at the same mirror, what they will see on it is different. What is happening is that the light from the surrounding objects bounces off the mirror in to the viewer’s eyes, and that is what gives the surface its appearance. If the surface of a mirror has no appearance without a viewer, then what does it look like when nobody is gazing at it? And how can we see it, without looking at it? By manipulating the surface of the mirror, Alisa Maria creates reflections that exist even when the mirror is not being viewed, blurring the line between perceived appearance and actual appearance.

From the Beach Inspiration

Colourful seaweeds and shells washed up on the beach by the Atlantic ocean in Newfoundland.

Kelp found resting on the rocks positioned by the waves that brought it to the shore. -Newfoundland December 2017

From the Beach A trio of organic shapes sit on the surface of this mirror, a smooth pebble, washed up seaweed, inspired by what can be found on the shore of a beach.

Waves This overlapping mirror has contrasting edges, the organic waved shapes extend past the surface of the mirror and overlap the straight lines. The thick acrylicâ&#x20AC;&#x2122;s edge reflects the light creating highlights at each curve. Created in three sizes.

A visit to the Orto Botanico di Padova -one of the oldest botanical gardens with its plants dating to the 1500sgave me the opportunity to see endless types of leaves and colourful flowers each next to each other. Shadows and silhouettes overlapped under the hot summer sun. -Padova, August 2017

Botanical Garden A vibrant blue fern branch brushes across the surface of this arched mirror. When one gazes at themselves, their reflection becomes intertwined amongst the leaves.

Hoops The geometric lines draw the eye around the edge of each shape as well as to the negative spaces which have no reflection. The different shapes create harmony with each other as they are all contained within one encompassing oval.

Many towns situated around the Adriatic and the Mediterranean sea share the landscape of cliffed terrain overlooking the water. Inhabitants have adapted to this land and the architecture is shaped by it.

The historic structures built on these terrains have not disturbed the earth beneath, resulting in clustered and seemingly overlapping homes and steep staircases. I first admired this on a trip to Sicily and most recently while in Rovigni. -Croatia August 2017

Arch This layered mirror has a subtle three-dimensionality in the shapes, the gold and silver mirror are each cut separately and overlaid on the black acrylic backing creating an overlapping scene.

This is a Venetian flooring technique which utilizes a mix of colourful stones. The chaotic pattern, seemingly random, is accurately calculated by the stoneworker to be evenly distributed. A design within the rocks is subtly visible in this photo of a floor in my home in Veneto.

Each colourful stone used has multiple edges, when they are placed together it creates a buzzing energy. This is another floor in my home, this tiled terrazzo shows both craftmanship and manufacturing. A human eye is still essential to evenly distribute the colours, only the lack of it would result in truly a random pattern which would not be as harmonious. Venice- July 2017

Terrazzo Inspired by the Italian stone flooring technique, this vibrant piece has colorful cutouts laid over the mirror. Appearing random, the cutouts had to be carefully selected to be harmonious in colour and with the edges.

Nautical ropes on the edge of the dock are tied to secure the constantly rocking boats that sit on the neverstill water.

A rope section that had fallen off a boat, brought back to land by the ocean, found half embedded in ice. -Port Rexton December 2017

Rope A thick gold rope wraps this mirror and continues past the edge, itâ&#x20AC;&#x2122;s reflection suddenly disappearing. The ends can be left hanging down to the floor, or tied in an oversized knot completing a circular frame.

About the designer: Alisa Maria Wronski is an Italian born designer who finds inspiration in the everyday. A graduate of Industrial Design at OCAD U, she has curated several furniture exhibitions and has exhibited her work in Milan Design week as well as Toronto. “A Mirror’s Surface” is her first solo exhibition, it was awarded People’s Choice for Favourite Exhibition of the 2018 Toronto Design Offsite Festival. She currently resides in New York City. To learn more about her projects visit www.alisamariawronski.com @alisa_maria 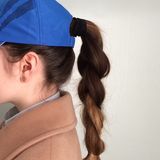 The accompaging book from my solo exhibition "A Mirror's Surface"

The accompaging book from my solo exhibition "A Mirror's Surface"