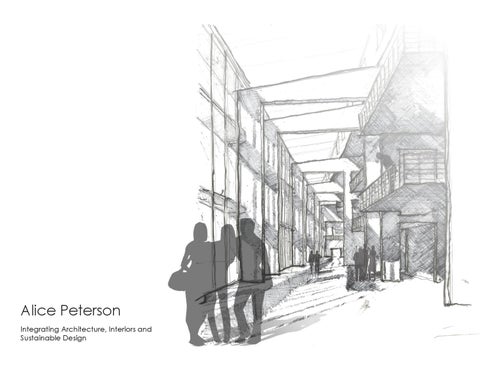 Bridging the Gap between Gray and Green My thesis project was based in the Gateway district in Portland Or and explored the way in which the design of a single building can begin to be the catalyst project for the development of a district. Gateway, currently one of the 5 pilot EcoDisticts in Portland, faces the issues of many suburban districts in the country; large big box buildings and parking lots, lack of pedestrian connectivity and little green space. The project aimed to set a precedent in the area and begin the development of a Greener Gateway. The education centers sits adjacent to I-205 and therefor becomes a sign for Gateway. The concept for the building, â&#x20AC;&#x153;life behind the wallâ&#x20AC;? was a direct response to the highway. Two educational facilities branched off of the wall to form a campus. The center provides educational spaces for both students and community.

Sustainable Design Sustainable strategies were at the for front of the design. Passive approaches were incorporated both at the site and building scale. Natural ventilation, water channels collecting rain water, day lighting shafts, and shading devices responding to heat gain were all included in the design. Rain Water Distribution

Community Space Creating community spaces was an important aspect of the design, both on the interior but also in the campus design. The organization of the education center was based around 3 types of learning spaces, lab, classrooms and workshops. Each cluster of spaces was then accompanied by a common/gathering space (Left) The campus design incorporated a large hardscape area for community gathering and other large functions.

.02 Portlandâ&#x20AC;&#x2122;s Resilient Mixed Use What is resilient mixed-use? This project was located at the intersection of Fremont St. and Mississippi St. in Northeast Portland and investigated the concept of a mixed use development that would allow for the changing needs of its occupants overtime. The project included a variety of housing types, light industrial/warehouse facilities, retail, a restaurant and public meeting space. The goal was to understand the relationship of the programming elements and design spaces that could grow and shrink. Adjacencies of atypical program elements became a focus in my studio project and I developed a variety of housing types that combined these elements.

Type 1 3 2 The first type combined medium sized housing with light industrial below. The location of the circulation allowed for the housing to be divided by floors if a smaller unit size was desired. The unit also faced the street to allow for a live/work type space.

The third type of housing was designed around the studio and the large living unit. Both unit types were long and narrow to allow for cross sectional division of the space

The second type stretched across the circulation corridor to allow for an easy division of space. Once again the placement of the stair was crucial for the shifting needs of space.,

.03 Vicenza Piazza How do you form public space? This project took place in Vicenza Italy on the study abroad program spring 2011. The project was based around designing a public space and building that connected to Palladioâ&#x20AC;&#x2122;s basilica built in 1500. The basilica has a grand ballroom on the second floor, only accessible from one staircase. The first goal of the project was to design a building that would act as a grand stair to the room that could serve the community as a whole. The second goal of the project was to enhance the current public piazza that exists in Vicenza. There is a series of 4 piazzaâ&#x20AC;&#x2122;s surrounding the basilica, 3 of which are successful and one that remains vacant and dead. The building was designed to enhance that public space and serve as a public facility.

Three buildings were designed to frame the public space and respond to the current conditions in Vicenza. One building was primarily used for offices, and the other two public functions

I was intrigued by the variety of public spaces in Italy and wanted to create a series of unique experiences in the project. Varying roof heights, sizes of spaces and materials all became important elements .

How does cultural character inform design?

The design of the Tapalpa Country Club is driven by the interaction of the rectilinear and curved forms. Circulation and outdoor space is created at the intersection of the forms allowing for smooth transitions. Located in Tapalpa, Mexico, the ancient city is populated by tourism, influencing the character of the city. The hotel is designed to reflect the traditional architecture of the area through the use of stucco finish and clay tile roofing. The hotel faces the two most active volcanos in North America, the Colimaâ&#x20AC;&#x2122;s. All rooms and views open towards the view giving value to every space. This project allowed for the design at multiple scales, overall hotel design, small room design and medium suite design.

Suite The suites were designed to all stem from a central garden and open towards the view of the volcanos. Each unit included two bedrooms and two baths, again with an emphasis on color and materials.

The design of the rooms was focused on the emphasis of the outward view. The spaced was designed with attention to color, level changes for space differentiation and material qualities.

The hotel was designed with the rooms in the main building and the suits cascading onto the hillside, with pools and patios. The main floor houses rooms, a cafe and the lobby while the second floor holds a gym and spa.

What is a community oriented police station? The design for the police station was focused on community, sustainability and efficiency. Located in Salem Oregon, the site for the station was a four-block campus including the civic center, public library and fire station. The city of Salem is in the process of designing a new station and used the design studio as a way to explore the possibilities for the facility The city expressed their desire for the police station to bring energy back to the campus and create a community hub. Salem was chosen as the Sustainable City for the year (through an University of Oregon program, SCI) thus designing a sustainable facility was at the heart of the design.

One primary goal of the police station was to bridge the gap between the public and the police. The design had two primary nodes, private and public, with offices connecting them.

The interior aimed to provide a comfortable environment for all staff by allowing for optimal daylight and cross ventilation.

The complicated site required extensive analysis, especially dealing with emergency access for police vehicles, parking, and connection to the greater city. The building aimed to re-connect the campus.

Sutor House Model Architect- Pietro Belluschi Pietro Belluschi was an influential architect in Portland’s history. To honor his legacy, a museum exhibit was designed and a group of students were asked to recreate some of his greatest works in models. I and a fellow student worked on the Sutor House (1938). We translated the drawings from print to computer and then drafted them in AutoCAD. Using both the laser cutter and hand modeling methods, we built a 4’ x 5’ museum quality model. It is currently on display at the Oregon Historical Society.

About the Designer From the moment I took my first architecture class, I knew I had found a field that would become a lifelong passion. Architecture has enabled me to combine my natural ability to understand how a person feels in a space with my innate creativity. My education has exposed me to the processes of integrated design and I am passionate about combining architecture, interior design, and sustainable design to create projects that are environmentally responsible and directly address clientsâ&#x20AC;&#x2122; needs. I relish the opportunity to work on designing spaces that enhance the well being of the people in the space and stimulate the relationship between the occupants, the buildings and the surroundings. My educational experience has allowed me to explore a variety of media, improving my digital modeling and rendering skills, but also enabling me to better understand the design process; beginning with hand sketches and concept models, moving to SkethUp and hand renderings, and finishing with programs such as Revit and Photoshop to bring the design to life. I am a self-motivated and hard-working individual and I thrive when participating in collaborative design. As a young designer am eager to use my skills learned in school in the professional world and continue to develop my architectural knowledge. Thank You.