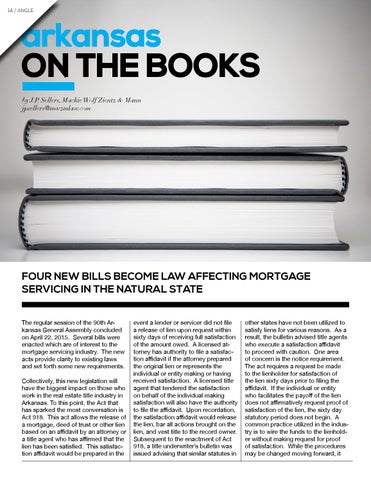 FOUR NEW BILLS BECOME LAW AFFECTING MORTGAGE SERVICING IN THE NATURAL STATE The regular session of the 90th Arkansas General Assembly concluded on April 22, 2015. Several bills were enacted which are of interest to the mortgage servicing industry. The new acts provide clarity to existing laws and set forth some new requirements. Collectively, this new legislation will have the biggest impact on those who work in the real estate title industry in Arkansas. To this point, the Act that has sparked the most conversation is Act 918. This act allows the release of a mortgage, deed of trust or other lien based on an affidavit by an attorney or a title agent who has affirmed that the lien has been satisfied. This satisfaction affidavit would be prepared in the

event a lender or servicer did not file a release of lien upon request within sixty days of receiving full satisfaction of the amount owed. A licensed attorney has authority to file a satisfaction affidavit if the attorney prepared the original lien or represents the individual or entity making or having received satisfaction. A licensed title agent that tendered the satisfaction on behalf of the individual making satisfaction will also have the authority to file the affidavit. Upon recordation, the satisfaction affidavit would release the lien, bar all actions brought on the lien, and vest title to the record owner. Subsequent to the enactment of Act 918, a title underwriterâ&amp;#x20AC;&amp;#x2122;s bulletin was issued advising that similar statutes in

other states have not been utilized to satisfy liens for various reasons. As a result, the bulletin advised title agents who execute a satisfaction affidavit to proceed with caution. One area of concern is the notice requirement. The act requires a request be made to the lienholder for satisfaction of the lien sixty days prior to filing the affidavit. If the individual or entity who facilitates the payoff of the lien does not affirmatively request proof of satisfaction of the lien, the sixty day statutory period does not begin. A common practice utilized in the industry is to wire the funds to the lienholder without making request for proof of satisfaction. While the procedures may be changed moving forward, it