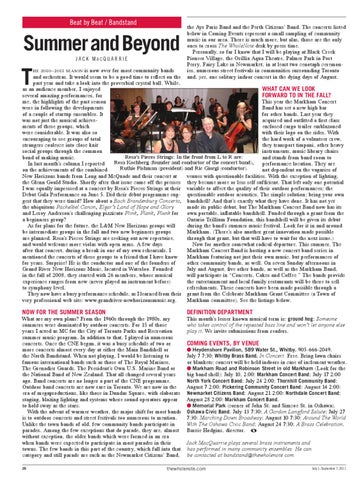 Summer and Beyond JACK MACQUARRIE

the Ayr Paris Band and the Perth Citizens’ Band. The concerts listed below in Coming Events represent a small sampling of community music in our area. There is much more, but alas, those are the only ones to cross The WholeNote desk by press time. Personally, so far I know that I will be playing at Black Creek Pioneer Village, the Orillia Aqua Theatre, Palmer Park in Port Perry, Fairy Lake in Newmarket, in at least two cenotaph ceremonies, numerous street festivals in communities surrounding Toronto and, yes, one solitary indoor concert in the dying days of August.

he 2010–2011 season is now over for most community bands and orchestras. It would seem to be a good time to reflect on the past year and take a look into the proverbial crystal ball. While, as an audience member, I enjoyed WHAT CAN WE LOOK several amazing performances, for FORWARD TO IN THE FALL? me, the highlights of the past season This year the Markham Concert were in following the developments Band has set a new high bar of a couple of startup ensembles. It for other bands. Last year they was not just the musical achieveacquired and outfitted a first class ments of these groups, which enclosed cargo trailer emblazoned were considerable. It was also so with their logo on the sides. With encouraging to see groups of total the hard work of a volunteer crew, strangers coalesce into close knit they transport timpani, other heavy social groups through the common instruments, music library chairs Resa’s Pieces Strings: In the front from L to R are: bond of making music. and stands from band room to Resa Kochberg (founder and conductor of the concert band), In last month’s column I reported performance location. They are Ruthie Fishman (president) and Ric Giorgi (conductor). on the achievements of the combined not dependent on the vagaries of New Horizons bands from Long and McQuade and their concert at venues with questionable facilities. With the exception of lighting, the Glenn Gould Studio. Shortly after that issue came off the presses they became more or less self sufficient. That left only one potential I was equally impressed at a concert by Resa’s Pieces Strings at their variable to affect the quality of their outdoor performances; the Debut Gala Performance on June 5. Did their debut programme sug- questionable outdoor acoustics. The simple solution: bring your own gest that they were timid? How about a Bach Brandenburg Concerto, bandshell! And that’s exactly what they have done. It has not yet the ubiquitous Pachelbel Canon, Elgar’s Land of Hope and Glory made its public debut, but The Markham Concert Band now has its and Leroy Anderson’s challenging pizzicato Plink, Plank, Plunk for own portable, inflatable bandshell. Funded through a grant from the a beginners group? Ontario Trillium Foundation, this bandshell will be given its debut As for plans for the future, the L&M New Horizons groups will during the band’s summer music festival. Look for it in and around be intermediate groups in the fall and two new beginners groups Markham. (There’s also another great innovation made possible are planned. Resa’s Pieces Strings are seeking out new repertoire, through that grant, but that will have to wait for the next issue.) and would welcome more violas with open arms. A few days Now for another somewhat radical departure. This summer, The after that concert, during a break in one of my own rehearsals, I Markham Concert Band is hosting a new concert band series in mentioned the concerts of these groups to a friend that I have know Markham featuring not just their own music, but performances of for years. Surprise! He is the conductor and one of the founders of other community bands, as well. On seven Sunday afternoons in Grand River New Horizons Music, located in Waterloo. Founded July and August, five other bands, as well as the Markham Band, in the fall of 2008, they started with 26 members, whose musical will participate in “Concerts, Cakes and Coffee.” The bands provide experience ranges from new (never played an instrument before) the entertainment and local family restaurants will be there to sell to symphony level. refreshments. These concerts have been made possible through a They now have a busy performance schedule, as I learned from their grant from the Celebrate Markham Grant Committee (a Town of very professional web site: www.grandriver-newhorizonsmusic.org. Markham committee). See the listings below.

NOW FOR THE SUMMER SEASON

What are my own plans? From the 1960s through the 1980s, my summers were dominated by outdoor concerts. For 15 of those years I acted as MC for the City of Toronto Parks and Recreation summer music program. In addition to that, I played in numerous concerts. Once the CNE began, it was a busy schedule of two or more concerts almost every day at either the Main Bandshell or the North Bandstand. When not playing, I would be listening to famous international bands such as those of The Royal Marines, The Grenadier Guards, The President’s Own U.S. Marine Band or the National Band of New Zealand. That all changed several years ago. Band concerts are no longer a part of the CNE programme. Outdoor band concerts are now rare in Toronto. We are now in the era of megaproductions, like those in Dundas Square, with elaborate staging, blazing lighting and systems where sound operators appear to hold sway as the stars. With the advent of warmer weather, the major shift for most bands is to outdoor concerts and street festivals too numerous to mention. Unlike the town bands of old, few community bands participate in parades. Among the few exceptions that do parade, they are, almost without exception, the older bands which were formed in an era when bands were expected to participate in most parades in their towns. The few bands in this part of the country, which fall into that category and still parade are such as the Newmarket Citizens’ Band, 26

This month’s lesser known musical term is: ground hog: Someone who takes control of the repeated bass line and won’t let anyone else play it. We invite submissions from readers.

Jack MacQuarrie plays several brass instruments and has performed in many community ensembles. He can be contacted at bandstand@thewholenote.com. 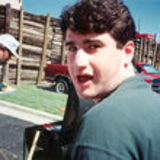