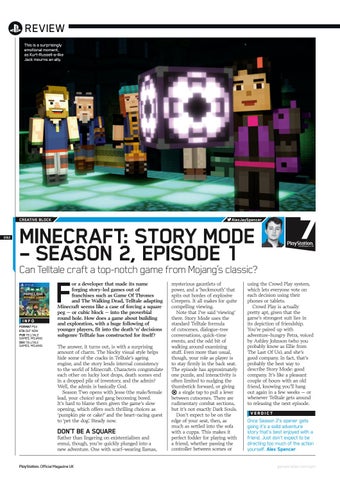 REVIEW This is a surprisingly emotional moment, as Kurt-Russell-a-like Jack mourns an ally.

Can Telltale craft a top-notch game from Mojang’s classic?

or a developer that made its name forging story-led games out of franchises such as Game Of Thrones and The Walking Dead, Telltale adapting Minecraft seems like a case of forcing a square peg – or cubic block – into the proverbial round hole. How does a game about building and exploration, with a huge following of younger players, fit into the death ‘n’ decisions subgenre Telltale has constructed for itself? The answer, it turns out, is with a surprising amount of charm. The blocky visual style helps hide some of the cracks in Telltale’s ageing engine, and the story lends internal consistency to the world of Minecraft. Characters congratulate each other on lucky loot drops, death scenes end in a dropped pile of inventory, and the admin? Well, the admin is basically God. Season Two opens with Jesse (the male/female lead, your choice) and gang becoming bored. It’s hard to blame them given the game’s slow opening, which offers such thrilling choices as ‘pumpkin pie or cake?’ and the heart-racing quest to ‘pet the dog’. Steady now.

DON’T BE A SQUARE

Rather than lingering on existentialism and ennui, though, you’re quickly plunged into a new adventure. One with scarf-wearing llamas,

mysterious gauntlets of power, and a ‘heckmouth’ that spits out hordes of explosive Creepers. It all makes for quite compelling viewing. Note that I’ve said ‘viewing’ there. Story Mode uses the standard Telltale formula of cutscenes, dialogue-tree conversations, quick-time events, and the odd bit of walking around examining stuff. Even more than usual, though, your role as player is to stay firmly in the back seat. The episode has approximately one puzzle, and interactivity is often limited to nudging the thumbstick forward, or giving q a single tap to pull a lever between cutscenes. There are rudimentary combat sections, but it’s not exactly Dark Souls. Don’t expect to be on the edge of your seat, then, as much as settled into the sofa with a cuppa. This makes it perfect fodder for playing with a friend, whether passing the controller between scenes or

using the Crowd Play system, which lets everyone vote on each decision using their phones or tablets. Crowd Play is actually pretty apt, given that the game’s strongest suit lies in its depiction of friendship. You’re paired up with adventure-hungry Petra, voiced by Ashley Johnson (who you probably know as Ellie from The Last Of Us), and she’s good company. In fact, that’s probably the best way to describe Story Mode: good company. It’s like a pleasant couple of hours with an old friend, knowing you’ll hang out again in a few weeks – or whenever Telltale gets around to releasing the next episode. VERDICT

Once Season 2’s opener gets going it’s a solid adventure story that’s best enjoyed with a friend. Just don’t expect to be directing too much of the action yourself. Alex Spencer