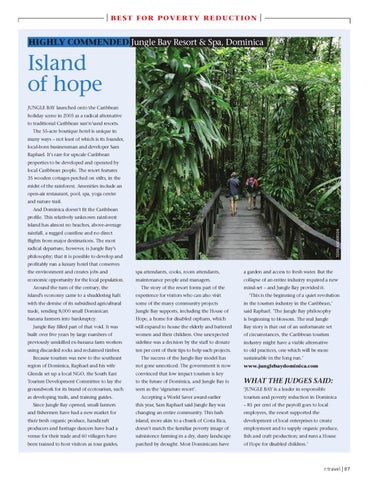 Island of hope JUNGLE BAY launched onto the Caribbean holiday scene in 2005 as a radical alternative to traditional Caribbean sun’n’sand resorts. The 55-acre boutique hotel is unique in many ways – not least of which is its founder, local-born businessman and developer Sam Raphael. It’s rare for upscale Caribbean properties to be developed and operated by local Caribbean people. The resort features 35 wooden cottages perched on stilts, in the midst of the rainforest. Amenities include an open-air restaurant, pool, spa, yoga centre and nature trail. And Dominica doesn’t fit the Caribbean profile. This relatively unknown rainforest island has almost no beaches, above-average rainfall, a rugged coastline and no direct flights from major destinations. The most radical departure, however, is Jungle Bay’s philosophy; that it is possible to develop and profitably run a luxury hotel that conserves the environment and creates jobs and

a garden and access to fresh water. But the

economic opportunity for the local population.

collapse of an entire industry required a new

Around the turn of the century, the

The story of the resort forms part of the

mind-set – and Jungle Bay provided it.

experience for visitors who can also visit

with the demise of its subsidised agricultural

some of the many community projects

in the tourism industry in the Caribbean,’

Jungle Bay supports, including the House of

Hope, a home for disabled orphans, which

is beginning to blossom. The real Jungle

will expand to house the elderly and battered

Bay story is that out of an unfortunate set

built over five years by large numbers of

women and their children. One unexpected

of circumstances, the Caribbean tourism

sideline was a decision by the staff to donate

ten per cent of their tips to help such projects.

to old practices, one which will be more

Jungle Bay filled part of that void. It was

Because tourism was new to the southeast

The success of the Jungle Bay model has

‘This is the beginning of a quiet revolution

sustainable in the long run.’

region of Dominica, Raphael and his wife

not gone unnoticed. The government is now

Glenda set up a local NGO, the South East

Tourism Development Committee to lay the

to the future of Dominica, and Jungle Bay is

WHAT THE JUDGES SAID:

groundwork for its brand of ecotourism, such

seen as the ‘signature resort’.

‘JUNGLE BAY is a leader in responsible

as developing trails, and training guides.

tourism and poverty reduction in Dominica

– 85 per cent of the payroll goes to local

and fishermen have had a new market for

changing an entire community. This lush

employees, the resort supported the

island, more akin to a chunk of Costa Rica,

development of local enterprises to create

producers and heritage dancers have had a

employment and to supply organic produce,

venue for their trade and 60 villagers have

fish and craft production; and runs a House

been trained to host visitors as tour guides,

parched by drought. Most Dominicans have

of Hope for disabled children.’