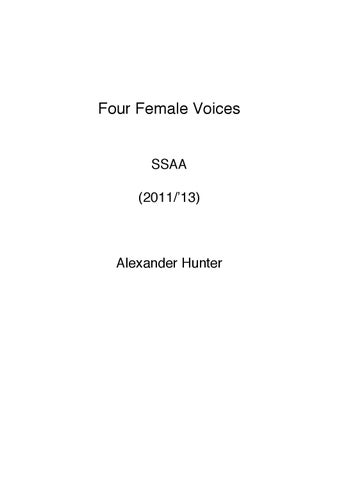 Four Female Voices Performance Notes Four Female Voices was written in Seattle in April of 2011, and revised in Glasgow in June of 2013. The piece calls for an ensemble of four female voices (SSAA) with optional reciter (male or female), and can be made to be any length desired by the performers (mobile moment form). All four vocalists are to read from the score during performance. The optional text can be of any nature or length and is to be chosen by the performers. The only stipulation is that it must have been written by an author or poet who has connections to the place of performance (ex. born, raised, attended university). This means that if an ensemble is to tour with this piece a new vocal text must be chosen for each city. Special preference should be given to texts in which the location is featured. Examples include poetry about a local hill or city, a short story or essay in which the location is prominent. The point being both to form a direct connection between the audience and venue to the piece, and to maintain a sense of freshness for the performers. Performers may choose to perform any number of moments, and in any order. Moments may be repeated up to five times (though not necessarily consecutively). All performers are to start, proceed and end together. The length of the score for the vocal ensemble will need to be adjusted to correspond to the length of text, if one is used at all. In the case of an especially lengthy text, moments may be repeated more than five times as needed. If performing without a reciter, the piece may be anywhere from ten seconds to an hour in length. Four Female Voices utilises â&amp;#x20AC;&amp;#x2DC;moment formâ&amp;#x20AC;&amp;#x2122;, meaning each moment is to be approached separately. A space of at least one breath is to be observed between each moment. The pauses between moments need not be of a consistent length, and the acoustics of the performance space may influence the rate of progression (slower for large halls and quicker for small halls). The maximum pause between moments is one minute, but pauses over five seconds in length should only be used when a reciter is present, and even then very sparingly. The length of each moment should be at least five seconds, and again, need not be of consistent length. The spatial relationships between parts within moments are intended to be relative, but simultaneities should be observed accurately. All of this may be either improvised during performance, worked out beforehand, or any combination of the two. Vibrato is to be completely avoided. A quiet dynamic (while maintaining a good, full sound) is to be maintained throughout. The focus should be on the blending of sounds, with no one sound becoming more prominent than the others. Four Female Voices does not use equal temperament (though performances using this tuning system will be considered), and is instead based on the pure tones produces by the spectral analysis of the harmonics of an unheard fundamental. The four vocalists will be provided with headphones and a stereo signal consisting of sine waves. These sine waves will be tuned to the first 16 notes of the harmonic series, starting on F1.

The right channel consists of pitches to be sung by Soprano 1 and Alto 1, with the left channel consisting of those to be sung by Soprano 2 and Alto 2. Both channels will contain the first five pitches of the harmonic series (including the fundamental) as a reference for tuning. Players may simply uncover the ear of the headphones corresponding to the channel they need not hear. The performers may choose to have a separate signal containing the fundamental (F1) amplified (and constantly audible to themselves and the audience) at a low volume during performance. Mix 1: F1, F2, C3, A3(-14c), C4, F4, G4 (+4c), B4 (-49c), C5, D5(+41c), E5(-12c) Mix 2: F1, F2, C3, A3(-14c), C4, Eb4(-31c), F4, A4 (-14c), C5, Eb5(-31c), F5 Optional Mix 3 (running through a speaker audible to performers and audience): F1 In lieu of syllables or IPA notation, directions for mouth aperture and tongue position are given. Aperture is indicated using a circle below the staff. An open circle indicates a wide open mouth, a closed circle indicates a completely closed mouth, and the lack of a circle indicates a normal (half-open) position. Tongue position may be either towards the rear, middle (â&amp;#x20AC;&amp;#x2DC;normalâ&amp;#x20AC;&amp;#x2122; position) or front of the mouth. Rear position is indicated using a down-facing triangular notehead, normal position using standard noteheads, and front position using an up-facing triangular notehead. Performers may arrange themselves anywhere in the performance space so long as each can see and hear every other. Preference should be given to close proximity to the audience. 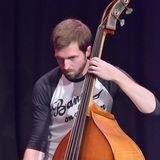