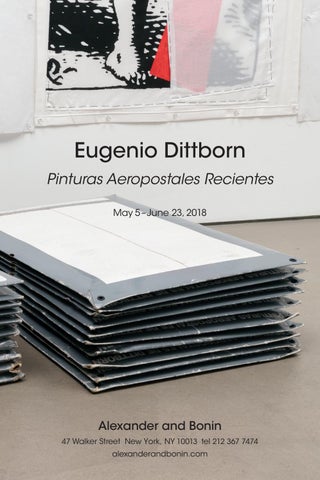 P R IM ORD IAL MA R KS Laura Braverman Yellowblack, one of Eugenio Dittborn’s most recent Airmail Paintings, is permeated with vivid yellow pigment and expressive charcoal frottage. Four strips of combined pieces of fabric are horizontally distributed and stitched across the surface, directing our attention away from the pictorial elements that constitute them and toward the periodic rhythm they produce. Dittborn has referred to these parallel lines as “palotes” (in English, “pre-writing strokes”)—the repeated lines that children draw as a first step toward learning how to write. A closer look reveals that similar marks reappear in different forms throughout the new Airmail Paintings.1 They reemerge as rectangular cut-outs of photo-silkscreens stitched onto the support of works such as Tintura and Mirar a. They can be seen within photo-silkscreens themselves as parallel black lines in Mirar a and Hilvanar. They also take the form of multicolored acrylic strips painted diagonally on the surfaces of Ordnung, Cubrir, and Mirar a. In the artist’s words,“almost everything is subjected to palotización.”2 If pre-writing strokes are a pervasive pictorial mark in this series, their key features also appear to echo many of the conceptual and poetical themes that have become central to Dittborn’s Airmail Paintings. Pre-writing strokes are defined by repetition; one stroke never stands alone but is surrounded by many iterations of itself. As the term’s suffix in Spanish -ote indicates, they imply an augmentative value. But while they repeat the same shape over and over again, they vary in their repetition. Of similar angle and size, they are, nonetheless, imperfect reiterations of each other. Repetition, incrementality, and variation have also been at the heart of Dittborn’s practice. Over the years, Dittborn has developed a personal language of appropriated images—engravings, cartoons, illustrations from how-to books, or drawings by schizophrenics—to which he has returned time and again. Much like pre-writing strokes, Dittborn’s iconography is systematically repeated. It is no surprise that a key image in Dittborn’s repertoire of signs—the figure of a hanged man which inspired an engraving by José Guadalupe Posada—would function as a large pre-writing stroke at the lower right of the work Tintura. As Dittborn noted, his reuse of the hanged man “can be understood as a comment in expansion: the recycling of a fragile trace.”3 Similar to the frail traces of a child’s marks, Dittborn’s recycled images are subject to mutation with every repetition. Inserted within different referential fields, the visual quotations renew the multiple associations that they generate. The air routes that the Airmail Paintings take to reach different locations have often been represented in the artist’s catalogues as lines running across the Earth’s surface. “On the map of the world,” Tintura, Airmail Painting No. 193, 2017-18, dye, acrylic, stitching, and photo-silkscreen on one section of Loneta duck fabric, 82 5⁄8 x 55 in/210 x 140 cm

Dittborn noted, “this circulation is like a giant scale writing: these multicoloured, multikilometred brush-

strokes are paint hanging in the sky.”4 Many pre-writing exercises require children to trace a line to join one point to the next, invoking notions of movement and destination. But while the drawing of a line could imply finality, it is continuously repeated and altered in its repetition. The “giant writing” that Dittborn’s envelopes trace while traveling across the globe act in an analogous way. When an Airmail Painting travels to an exhibition space, a line is traced between two distant points, not to signify a journey’s beginning and end but later to be repeated as additional journeys. And with each new line of travel comes a distinct semantic and cultural context, subjecting the work to different readings. The envelopes in which the paintings travel carefully record their various destinations, imbuing them with a sense of past journeying that also alters every subsequent reception.5 As the text written on the envelope of Caer indicates,“to see an airmail painting is to see between two travels.”6 Characterized by repeated movement and varied receptive outcomes, the Airmail Paintings’ vast writings in the sky can be seen as Dittborn’s production of global-scaled, supra pre-writing strokes. If the largest and most intangible form of pre-writing strokes in the Airmail Paintings corresponds to the lines traced by their travels, what represents, then, their most small-scaled and palpable form? The folds of the paintings, Dittborn upholds, may be considered their infra pre-writing strokes.7 From the very beginning of the series, Dittborn has preserved the creases that allow the paintings to be folded, packed, and sent through the postal system to circumnavigate the globe. Not only do the folds simultaneously enable and articulate the works’ airmail strategy, but they also represent the very first graphic mark on their surfaces. As an elementary physical armature, they trace the way for any subsequent pictorial or graphic inscription, which is compelled either to acknowledge or interfere with their reticulation.8 The triptych Cubrir is a good example of such interactions; while the red and black acrylic marks on the right panel are discontinued to

reveal the painting’s creases, the pictorial activity on the left panel resists their structuring. Folds have a similar status to that of pre-writing strokes: they are basic and fundamental marks that appear in the earliest stages of development to condition any later trace. “Robinson Crusoe, to count the days of imprisonment on the island […] marked, in the trunk of a tree, a small diagonal line,” recounted Dittborn.9 In this anecdote, the mark acquires a temporal value by becoming a means of transcribing elapsed time. Not only does the pattern that Dittborn’s pre-writing strokes adopt— accreted diagonal marks—allude to such a use, but the creases of the Airmail Paintings themselves are imbued with temporal allusions. The folds testify to the journeys undertaken, the distances covered, and the moments of display. As travels multiply, the ever-deepening creases of a painting’s fabric become the evidence of the passage of time, echoing the calendrical function of Crusoe’s marks. Frequently incorporated in Dittborn’s Airmail Paintings are reproductions of drawings from a 1933 how-to-draw book by Robert Lambry. The manual, titled Le Langage des Lignes, provides a basic formula for drawing the world. It contends that through a repeated use of simple and small sticks, one can quickly learn to compose a variety of objects and figures, guaranteeing “immediate results with the simplest lines.”10 Distrustful of such simplification, Dittborn sees the handbook as “an emptying process,” that “decrees that the world is nothing but little skeletons: abbreviations that leave the world completely lacking in singularity.”11 The book’s prescriptive method—its provision of a general structure to frame, summarize, and reproduce reality—belongs to the realm of positivist thought that Dittborn has long been dubious of. A small snippet from the Lambry publication is included on the left panel of Hilvanar. It shows a young girl holding a plumb line, an image which could allude to an axiomatic approach to the world. The image’s integrity contrasts with the patched, fragmented quality of its surroundings. Dittborn’s pictorial composition, as opposed to Lambry’s, does not provide for an easy dissection of its constituting elements. In addition to the absence of facile visual entry in such discontinuous compositions, much of the information conveyed by the Airmail Paintings’ pictorial additions is left intentionally ambiguous. Signifiers, which at first appear selfevident, slowly become enigmatic in the absence of clues or allusion to their sources. At times, information is physically obscured; in Cubrir, a thin piece of fabric is overlaid on the central figure, whose face in turn is

hidden by layers of acrylic paint. And while Dittborn’s signs provide no immediate and apparent meaning, their juxtaposition further destabilizes any syntactic continuity. In contrast to Lambry’s figures, which are united in their common schematic makeup, Dittborn’s images, as they gather on the surface of the works, create ambiguous associations or disassociations that further disrupt any convergence of meaning. Defined by ellipsis and discontinuity, the Airmail Paintings defy conventional narrative. As a result, they cannot be read linearly, like alphabetical script. If anything is consistent in Dittborn’s works, it appears to be fluctuation. “The compound drink divides itself if it is not shaken,” announces Heraclitus’s doctrine on the envelope for Nadar.12 The nature of a Dittbornian painting, medium, or image, just like Heraclitus’s drink, is always defined by the changes and movements to which it is exposed. Airmail Paintings themselves are transitory objects; not only are they shaped for and by travel, but they are in constant transit between two formats. They oscillate between being folded and packed in envelopes, their “epistolary and volumetric form,” and being unfolded and exhibited, their “pictorial and planimetric form.”13 The multicolored stains that permeate several panels’ fabric are also the result of transitory processes as fluids unpredictably trace their way through the material. Loosely sewn onto the surface of the paintings, Dittborn’s textile grafts equally imply provisionality and transience. What is more, the figures that they reproduce are often situated in intermediary states. The images in Dittborn’s iconic repertoire—the discovered body of a Neanderthal man in Nadar, a king falling to his death in Caer, or the corpse of the hanged peasant in Tintura and Hilvanar—are all in states of transition, suspended between life and death. Both transience and inconclusiveness are at the heart of Dittborn’s conceptual, rhetorical, and material practice. It is no accident, then, that the artist would devote his attention to pre-writing strokes, primordial marks which are imbued with such attributes. Pre-writing strokes are transitory marks. They appear in an intermediate stage in which the person producing them is neither fully illiterate nor effectively literate. While they trace the way for alphabetical writing, they belong to a provisional and in-between phase. Moreover, pre-writing strokes are undogmatic marks. As Dittborn himself underlined, both “children and nomads enter history while making palotes, a semi-failed march.”14 For both children

and nomads, these graphic marks are the first step toward learning or establishing a specific system of thought. Whereas children’s strokes are a means to learn the units of a specific language, the lines of nomads emerge at the onset of sedentism and society formation. In both cases, however, the marks are primary formulations which are not yet bearers of meaning. In much the same way as Airmail Paintings, these primary markings disrupt the prevailing codes of legibility. Distrustful of any fixity, Dittborn concentrates on marks which avoid linearities and offer no finality

in reading. In contrast to the certitude that alphabetical writing can provide, pre-writing strokes do not imply a unifying meaning. In fact, Dittborn’s strokes appear to place themselves against dominant and dogmatic processes of meaning-making. In the Airmail Painting titled Ordnung, for example, dozens of red, black, and white strokes disrupt the orderliness imposed by an overlaying grid, which, along with the easel painter on the right panel, suggest traditional fine art methods of depicting reality.15 In other instances, such as in Cubrir, Dittborn’s pre-writing strokes appear to take precedence over the geometric and universally-aspiring marks of modernism. At other times, such as in Mirar a or Hilvanar, Dittborn transforms the expressive and authoritative strokes of the artist into primary gesturalism. In each case, a set system of meaning-making is suspended by the superposing of Dittborn’s pre-signifying marks. On the threshold of meaning, Dittborn’s strokes are not literal but open-ended. They allow for a broad spectrum of possible significations to develop and for different paths of thought to emerge, celebrating—as the Airmail Paintings so sensibly do—fluctuation, ambiguity, and chance.