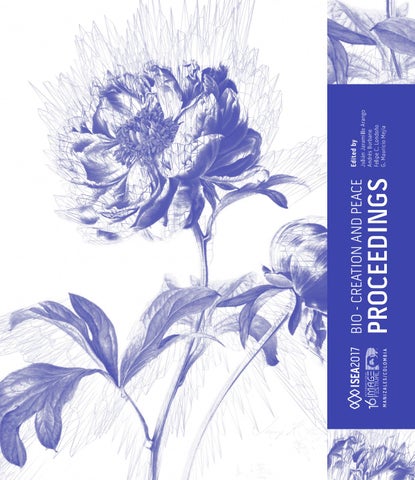 ISEA2017 Manizales BIO-CREATION AND PEACE Proceedings of the 23rd International Symposium on Electronic Arts. Editors: Julián Jaramillo Arango, Andrés Bubarno, Felipe César Londoño & G. Mauricio Mejía. Copy-editing: Grafos Soluciones. Editorial Coordinators: María Camila Hurtado Arciniegas & Mariana Valencia Giraldo. Image Design ISEA2017: Alexander Cano. Cover Design: Luis Miguel Álvarez Valencia Design and Diagramming: Julián David Patiño Galvez, Diego Alejandro Giraldo Ospina, Santiago Benavides Osorio & Luis Esteban López Salgado. Copyright © 2017 all rights reserved by the individual authors, Department of Visual Design, Universidad de Caldas, and ISEA International. No part of this publication may be reproduced, stored in a retrieval system,or transmitted in any form or by any means, without prior written permission of the individual authors and ISEA International. Individual authors of papers and presentations are solely responsible for all materials submitted for the publication. The publisher and the editors do not warrant or assume any legal responsibilities for the publication’s content. All opinions expressed in the book are of the authors and do not reflect those of the publisher and the editors. Department of Visual Design, Universidad de Caldas: Calle 65 No. 26 – 10, Bloque Orlando Sierra, floor 4 Manizales, Colombia Printed in Bogotá D.C ISBN: 978-958-759-161-3

Abstract In order to investigate the effectiveness of public health campaigns to reduce mosquito-borne diseases, I have designed a series of “public experiments” that combine ethnography and artistic installations. In these experiments, a collaborative team— including scientists, artists

and patients—create relational art experiences using visual and sonic media and performance. People in these collaborations participate by attending “parasite” events in which they gather together as research partners, subjects and objects at the same time. These events provide a means for dialogic and experimental approaches, allowing the hybridisation of “research outcomes” and “the research itself.” My approach to collaborative forms of research aims at ethical and inclusive ways of understanding people’s knowledges and understandings. The best practices for successful collaborations are, therefore, derived from open-ended and process-based events that stimulate debate among the public and the intersubjective exchange of experiences. Based on these premises, I present Serotype, Vampires and the Mosquito Kite Project, public experiments in which the pre-established ways of working for designing health campaigns were put aside. By doing so, I argue that a new relationality, one that includes both the academic and public domain, is needed for thinking differently about mosquitoes and diseases.

As humans, most of us believe we have power over other living beings. We think we are superior and invincible. However, mosquitoes, with their annoying buzz and their capacity to transmit diseases, constantly reveal how vulnerable and powerless humans are (Jones, 2012; Valencia-Tobón, 2012, 2015). Mosquitoes eat us alive: by sucking blood they are taking part of our life (Galeano, 1985, p. 27; Jones, 2012, p. 37; Painleve, 1945; Ulrich, 1993, p. 85; Updike, 1960). There have been many attempts to eliminate

mosquitoes, all based on the premise that these insects could be removed from the earth (Fang, 2010). After hundreds of years, though, mosquitoes not only continue to reinforce blood ties with us but they also bring about new crises for human populations—seen in the latest Zika and chikungunya virus outbreaks, for example. Governments and health authorities respond to such threats by replicating campaigns that were standardised more than 90 years ago to fight mosquito-borne diseases (for examples of how campaigns are standardised, see: https://goo.gl/Bby5PU). Eradication campaigns invite communities to participate in taking action against mosquitoes, suggesting that since mosquitoes breed in receptacles in and near human dwellings, people just need to destroy these receptacles and diseases will disappear. However, this approach has been applied without significant reduction of dengue, Zika or chikungunya cases across the globe. My work responds to this pattern of ineffective campaigns with collaborative artistic and ethnographic para-site events. Through these efforts, participants develop new ways of understanding the multiplicity of relations between humans, mosquitoes and diseases. I call this approach “multispecies ethnography as public experiment,” for while scientific approaches are delimited by objective and rational theories and the deductive method, the study of social relations in anthropology focuses on subjective realities, and art on aesthetic expressions. In this context, transdisciplinarity implies the problematisation of situations that require novel responses, raising questions and facilitating the interaction of new forms of thought, dialogue and experimental approaches, rather than simply considering problems as obstacles that need to be overcome (Barry & Born, 2013, p. 10; Barry, Born, & Weszkalnys, 2008, pp. 29-30).

This project focuses on the interaction of scientific, public and everyday understandings of mosquito-borne diseases. Interdisciplinary and transdisciplinary relations “portray the microsocial collaborative endeavour between artists and scientists as a crucible for creativity and as itself a focal value” (Barry et al., 2008, p. 30) . These events facilitate interactive communication and “participatory engagement” in which the human element and the subjective experience of “real people” (non-expert citizens or publics) are taken into account (Nowotny, Scott, & Gibbons, 2001, pp. 256–257). Para-Site Events and the Co-existence Criterion For George Marcus (2000), a parasite is a metaphor for the overlapping of academic and fieldwork spaces in contemporary ethnographic projects. It is a site where interpretation occurs within a dialogic model, where experimentation is the key element (Marcus, 2000, pp. 5–6; Rabinow & Marcus, 2008, pp. 80–81). Thus, by allowing the hybridisation of “research outcomes” and “the research itself,” a para-site works against the conventional notions of the “field” and “fieldwork,” creating new relationships between participants (Marcus, 2000). Marcus does not evoke the negative connotation of “parasite,” as it is used in a narrative of resistance of the “weak over the strong”—for example, the capitalist as a parasite on the workers. Instead, the term points to a place for doing things in a different way to how they supposedly should be done, “a site of alternativity in which anything, or at least something different, could happen” (Marcus, 2000, p. 8). Building on this idea, I wanted to re-work fixed categories—like the discourse of eliminating mosquitobreeding sites and the notion of “human exceptionalism,” where we believe we are more important than other living beings—to create events for thinking critically about contact zones between human and non -human others, where the division of culture and nature is blurred (Allora, Calzadilla, & Chiang, 2015; Kirksey & Helmreich, 2010, p. 546). This implies constructing a mutually constitutive method between art, science and anthropology that looks for new results and explores the unexpected, by working on the aesthetics of human– mosquito life. To do so, I applied the co-existence criterion in both relational art (Bourriaud, 2002) and in ecological terms (Begon, Townsend, & Harper, 2006; Molles, 2015). This criterion indicates that works of art should

be created as a form of sociability and, therefore, a fundamental question should be asked in terms of public participation: does this work allow me to enter into dialogue? (Bourriaud, 2002, p. 109). In this framework, people’s thoughts are as important as the artwork as such. Relational art is a way of opening up the context and giving people the possibility to complement the work of art. In ecological terms, the coexistence of two species is possible when “interspecific competition is weaker than intraspecific competition” (Molles, 2015, p. 290); hence, different species coexist by a “differentiation of realised niches, or a ‘partitioning’ of resources” (Begon et al., 2006, p. 238). These strategies are materialised in a series of participatory experiments developed in Medellín, Colombia, and created with the collaboration of virologists, entomologists, artists, members of the public, and the subjects of my ethnography who have had dengue and other mosquito-borne diseases. Serotype, Vampires and the Mosquito Kite Project One example of these transdisciplinary collaborations is Serotype (Valencia-Tobón & Bimana Producciones, 2014), a fictional character who embodies the experience of having dengue fever. This character was created in partnership with artists and virologists, after identifying that eradication campaigns did not include the experiences of people who have had the disease (Valencia-Tobón, 2016). Another example is Vampires (Valencia-Tobón & 3B Espacio, 2013), a series of interventions in public and private spaces, designed to engage people in different ways with illness narratives and with virological and entomological understandings. Willing to reflect on human–mosquito relations, and knowing that the idea of “love” is deeply associated with the conception of blood as the very liquor of life (Jones, 2012, p. 38), we used the phrase “Vampires: your love hurts down to my bones” to advertise video installations, audio interventions and multi-sensorial experiments. The last example is the Mosquito Kite Project (Valencia-Tobón & Ramírez, 2014), supported by the Royal Anthropological Institute and the Horniman Museum in London. This project went beyond critiquing the discourse of traditional health campaigns to try to re-think how mosquitoes are understood to interact with people. We used a kite in the image of a mosquito to reproduce the form and movement of mosquitoes, and it was also the perfect tool to collect stories while walking

all around the city (see public responses to my work here: https://goo.gl/00kwCz). In all of these cases, the participants and I were expecting to reach the community in an innovative way, far from the typical approaches usually taken by health authorities. The concept of these events was to radically intervene and deliberately break the frame of reference of these spaces to create a third space, a new space of interaction. Through transdisciplinary collaborations we encouraged people to think of the mosquito as a living being rather than simply as an object to be eliminated. Such a new relationality is needed to think about mosquitoes and diseases not only because a world without mosquitoes is highly unlikely (Fang, 2010) but also because we need to accept that we cannot escape from parasites and viruses (Barnett, 2014, p. 216). Endings These art, science and anthropology experiments should be understood as a “negotiation” of intersubjectivities. Through these transdisciplinary collaborations, we have created a third space in which we facilitate new relationships among audience members and between the audience and collaborators. Now, what insights into the particular qualities of human relations with mosquito-borne diseases are revealed by this kind of work? For one, it offers a critical perspective on the structure of relations among virologists and entomologists in the way that they produce knowledge about mosquito-borne diseases, how the “public” is conceived, and what counts as “evidence.” With this insight, my collaborators and I designed and performed different experiments to reproduce this structure and invited people to take part in their design and operation. The experiments highlighted how laboratory science and state-led education campaigns were premised on particular relations between people and diseases/mosquitoes, and then allowed participants to play with and reconfigure such relations. In this process, we identified how people conceived of the relations between people and diseases/ mosquitoes, and then followed the understandings

of mosquito -borne diseases that emerged in participants’ responses to this work. Based on these experiences, I argue that health campaigns need to be re-designed, privileging relations and stimulating debate among the different actors who are part of the complex network of biological, 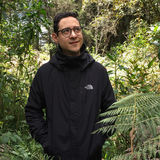