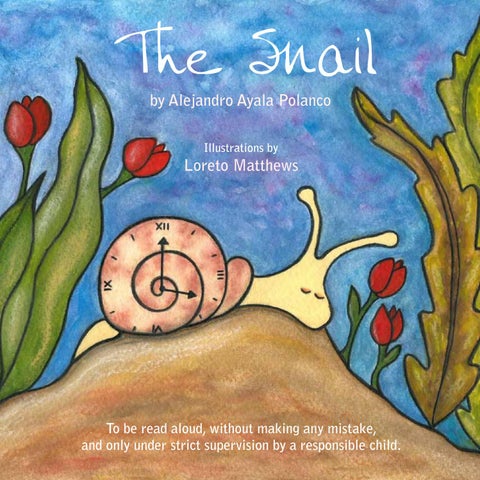 The Snail by Alejandro Ayala Polanco Illustrations by

To be read aloud, without making any mistake, and only under strict supervision by a responsible child.

The Snail by Alejandro Ayala Polanco

Copyright ÂŠ 2020 by Alejandro Ayala Polanco The Snail was writen by Alejandro Ayala Polanco during the years between 2003 and 2020. This edition counts with the authorâ&amp;#x20AC;&amp;#x2122;s diagramming and includes the illustrations of Loretto Mathews. Loretto wants to dedicate her work to her daugther Aline, who was in her arms while drawing. English translation by Dulce Guinand. The use of the content of this book is authorized under three conditions: (1) Non profit usage. (2) The original source must be clearly mentioned. (3) The delivered material must be shared under the same conditions of the original. Usage Lincense Creative Common atribution-non profit usage- Share same version 4.0. First edition: 2020 Homovegetus alejandro.vegetus@gmail.com Santiago de Chile www.homovegetus.cl

The Snail by Alejandro Ayala Polanco

...to the girls and boys who will explain this book to mom and dad.

It rains Girl, mind your step. Boy, watch carefully. It has rained and the snail family came out for a walk. Stop, take your cheek down close to the ground and listen. How long does it take for a snail to cross the garden?

Girl, smell the grass. Boy, hold your breathe. Itâ&amp;#x20AC;&amp;#x2122;s night time and the snail family came out for dinner. Close your eyes, rest on the grass and listen. How long does it takes for a snail to eat a whole leaf?

Girl, listen well. Boy, hold on and see. Thereâ&amp;#x20AC;&amp;#x2122;s a small beating drum within you. Can you hear its eco flowing on the Earth flowing through the trees to the inside of the snail?

I In the morning Was the silver cord Iâ&amp;#x20AC;&amp;#x2122;m leaving traced since before?, asked the snail to themselve.

Time stirs your silver cord, snail. A tender sprout from the garden, you are, that during their travel is drawing a straight line.

Snail, mathematician, snail slow and impassive is your job everything done is on go.

The journey draws your being.

Time feeds from us.

II Night time There once was a little snail that stopped their way one day and beholding their thin silver cord they asked to themselve. Could be here and there, traced since before in the grass, invisible lines, already traversed or not, that are roots and seed at the same time?

Snail, mathematician, snail life is not the time. Pick your silver body. A tender sprout from the garden, you are, no matter how far you get, you are home.

Night falls, snail stay awake and donâ&amp;#x20AC;&amp;#x2122;t be afraid, everything done is on go.

Alejandro Ayala Polanco Alejandro is a pioneer of veganism in South America and considered the father of the antispeciesist children’s literature in Chile. He is the creator of Homovegetus.cl (started in 2002), the first website about veganism in Chile, and founder of the vegan fonda “El Huaso Vegetariano” (started in 2006). This fonda was the original impetus for the current movement of vegan fondas and festivals during the national holidays in Chile. He is the author of more than ten published books, including “El libro de las ironías veganas” (“The book of Vegan Ironies”) and the suggestively titled “Haz el amor con lxs veganxs” (“Make love with vegans”). In 2019, Alejandro has been awarded the Shining World Compassion Award by The Supreme Master Ching Hai International Association in appreciation of his creative activism that aims to foster a society in which animals are respected. 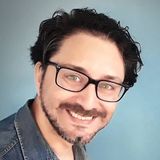