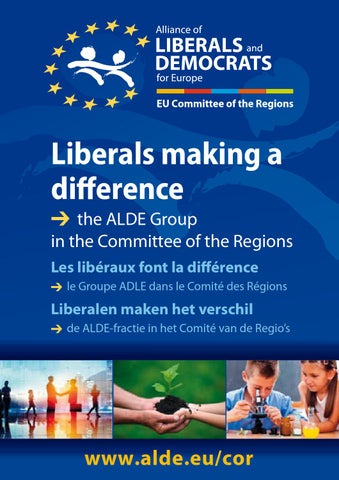 in the Committee of the Regions

EU Committee of the Regions

â&#x17E;&#x201D;â&#x17E;&#x201D; Who we are/About us The Alliance of Liberals and Democrats for Europe in the Committee of the Regions is a political group standing for liberal democrat values in Europe. We are committed to ensuring that the European Union develops legislation in as decentralised a manner as possible, communicating with and listening to Europeâ&#x20AC;&#x2122;s citizens in a systematic way. Our aim is to strengthen the link between citizens and the EU institutions by maintaining the highest standards of accountability, transparency, and efficiency. Ensuring that the views of local and regional authorities are represented in EU legislation goes to the heart of this belief. By upholding the principles of subsidiarity and

➔➔ Our priorities As part of the EU liberal family, which also includes the ALDE Party and the ALDE Group in the European Parliament, we believe… ★★ In freedom, democracy, equality, the rule of law and respect for human rights, including the rights of persons belonging to minorities. We believe that in order for a society to be free and fair we have to create an environment where everyone is free to pursue their passions, fulfil their potential and make a living for themselves. ★★ In the promotion of economic, social and territorial cohesion, and solidarity among Member States.

proportionality, that is to say that decisions are taken and applied as close to the citizens as possible and at the most appropriate level, the ALDE group wishes to make sure that common policies are implemented more effectively and at greater proximity. We do this by drafting or amending CoR opinions, as well as working to ensure that the Parliament takes on board CoR positions in the final readings before a proposal becomes law, or at earlier stages via contacts with European Commissioners and their teams.

★★ In free trade and a government that minimises interference in our daily lives and maximises individual and private sector initiatives. We believe in competition, removing obstacles to trade and labour mobility; and in effective regulation of the market. ★★ In ensuring that the heritage of cultures, languages and identities of the peoples of Europe is not lost, and is used to support the development of multiple identities. ★★ In promoting measures which enhance the ability of regions to contribute to Europe’s economic growth and their ability to develop a fair and effective European social model. ★★ In preserving Europe’s natural beauty and the environment for future generations. ★★ In sustainable development and a peaceful and stable Europe. ★★ In EU enlargement. We are strong proponents of further deepening and strengthening the Union based on common values that unite Europe.

★★ In the development of democratically legitimate local and regional authorities around the world, especially in the EU’s neighbouring states.

★★ On 4 February 2014, the European Parliament took on board a number of recommendations from the CoR regarding Better Law-making - opinion drawn up by Lord Graham Tope (UK/ALDE). The Parliament accepted that better law-making should be pursued in the spirit of multilevel governance, i.e. through coordinated action by the EU and national institutions together with local and regional authorities. In addition, it emphasised the significance of simplifying the regulatory environment, especially for 5

local and regional authorities, whose resources for the implementation of legislation are often limited and in many cases diminishing, especially regarding the extensive reporting requirements which are often passed on to the general public and businesses.

★★ On 10 September 2013, the European Parliament adopted its resolution on Making the internal energy market work which echoed a number of recommendations made by the CoR rapporteur Piet de Vey Mestdagh (NL/ALDE). The Parliament recognised the need for cooperation in the development of smart grids at European, national and regional level as well as the development of European standards for smart grids. The EP resolution also fully supports measures taken to introduce a level-playing field by creating more decentralised and competitive market models, given their potential to create more opportunities for local energy producers and for new industrial players. Reflecting the shift towards more 6

localised energy generation, the resolution also calls for large-scale investments to be made in parallel with investments in regional or even local networks.

★★ On 22 October 2013, the European Parliament adopted its resolution on Rethinking Education, in which it supported a number of recommendations made by the CoR rapporteur Fiona O’Loughlin (IE/ALDE). To name a few, the resolution calls for making vocational education and training (VET) an integral part of the education system. It also encourages Member States and local and regional authorities, in cooperation with educational institutions, to include elements of entrepreneurship education in the curriculum of basic and higher education as well as vocational training. Whilst acknowledging the importance of developing and implementing entrepreneurship-based education systems across Europe, the resolution also considers it vital to recognise the importance of combining public and private investment in education and training. 7

➔➔ Our initiatives ➔➔ Meetings with liberal councillors of Brussels Communes In 2012 the ALDE group held a pioneering meeting inviting local liberal councillors of Brussels communes to meet ALDE-CoR members. The meeting served as a chance to discuss the current challenges faced by councillors in all districts of Brussels as well as to provide an opportunity for the Brussels communes to benefit directly from the presence of EU institutions in their city. Since then the meeting has become an annual event, bringing together local and regional politicians from all over Europe to share best practices with their counterparts in Brussels.

Since 2010 the ALDE group in the CoR has held annual competitions to recognise the work of outstanding local and regional liberal democrat politicians and by doing so strengthening the ties between communities of Europe. There is a huge amount of excellent work that is being carried out in communities around Europe to involve citizens in the decisions that affect them, to make their lives better, to build bridges and new partnerships. We believe that this work needs to be identified and highlighted. We also know that by sharing knowledge about that work, and by giving each other new ideas, all the citizens of Europe can benefit. Local and regional politicians from ALDE and EDP member parties are eligible candidates for the awards, provided that they donâ&#x20AC;&#x2122;t currently hold a Committee of the Regions or European Parliament mandate. The nomination procedure starts in June and ends in September. The awards ceremony is held annually in December.

➔➔ Organisation of the CoR The Committee of the Regions is a political assembly consisting of holders of a regional or local authority electoral mandate (e.g. mayors, regional presidents and members of municipal councils) and of members who are politically accountable to an elected assembly. It provides institutional representation for all the European Union’s territorial areas: regions, provinces and municipalities. The CoR has 350 members, and an equal number of alternate members. The members of the Committee are appointed by the European Council for a five year period in accordance with the proposals made by each Member State. The number of members from each EU country roughly reflects the size of its population. The members come together according to their political affiliation in five different political groups, ALDE being the third in size and frequently holding the balance of power.

EU Committee of the Regions 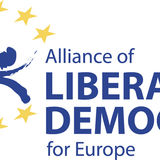