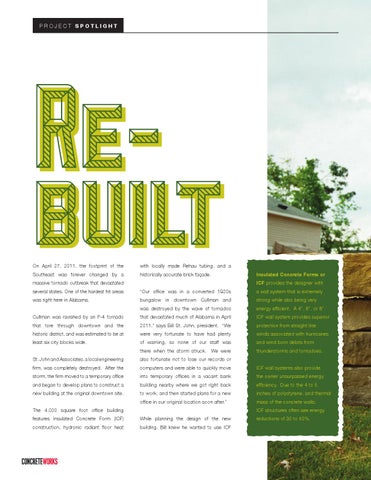 ICF provides the designer with

with locally made Rehau tubing, and a

Southeast was forever changed by a

several states. One of the hardest hit areas

a wall system that is extremely

was right here in Alabama.

bungalow in downtown Cullman and

strong while also being very

was destroyed by the wave of tornados

Cullman was ravished by an F-4 tornado

that devastated much of Alabama in April

that tore through downtown and the

historic district, and was estimated to be at

were very fortunate to have had plenty

of warning, so none of our staff was

and wind born debris from

there when the storm struck. We were

also fortunate not to lose our records or

firm, was completely destroyed. After the

computers and were able to quickly move

storm, the firm moved to a temporary office

into temporary offices in a vacant bank

and began to develop plans to construct a

building nearby where we got right back

to work, and then started plans for a new

inches of polystyrene, and thermal

office in our original location soon after.”

mass of the concrete walls,

While planning the design of the new

building, Bill knew he wanted to use ICF 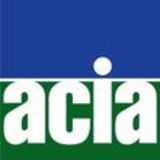 ConcreteWorks is a magazine of the Alabama Concrete Industries Association produced on a quarterly basis. The publication features in-depth...

ConcreteWorks is a magazine of the Alabama Concrete Industries Association produced on a quarterly basis. The publication features in-depth...