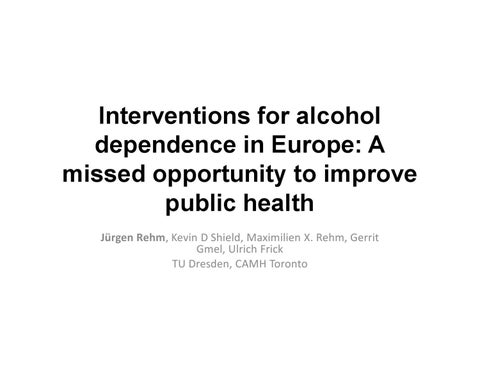 Total adult per capita alcohol consumption (recorded and unrecorded) in 2005

High exposure, high burden of mortality and disease • For men between ages of 15 and 64, 1 in 7 deaths in 2004 were caused by alcohol (clearly premature deaths given the life expectancy in Europe) • For women of the same age category, 1 in 13 deaths in 2004 were caused by alcohol • The proportion are even higher for burden of disease attributable to alcohol (years of life lost to premature deaths or disability)

How many deaths are attributable to alcohol dependence? 25 Men

What does this mean? • Most of the burden of alcohol stems from heavy drinkers (about 77% of the net burden, 67% of the overall burden), i.e., women drinking >40 g/day and men drinking >60 g/day • Alcohol dependence accounts for 71% of the net burden and 62% of the total alcohol-attributable burden • In other words, alcohol dependence causes the majority of mortality burden of alcohol • For burden of disease in DALYs, this proportion is much higher

Why is alcohol dependence treatment successful? It reduces level of consumption either to abstinence or by sizable reduction of heavy drinking. Relative gain in risk for mortality of reducing by three drinks/day for different levels of drinking

– For ethical reasons, but – also for public health reasons! 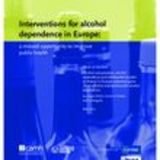 'Interventions for alcohol dependence in Europe: A missed opportunity to improve public health' was presented by Professor Juergen Rehm of D...

'Interventions for alcohol dependence in Europe: A missed opportunity to improve public health' was presented by Professor Juergen Rehm of D...