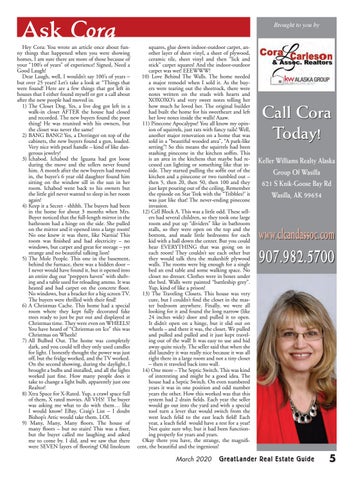 Ask Cora Hey Cora: You wrote an article once about funny things that happened when you were showing homes, I am sure there are more of those because of your “100’s of years” of experience! Signed, Need a Good Laugh! Dear Laugh, well, I wouldn’t say 100’s of years – but over 25 years! Let’s take a look at “Things that were found! Here are a few things that got left in houses that I either found myself or got a call about after the new people had moved in. 1) The Closet Dog. Yes, a live dog got left in a walk-in closet AFTER the house had closed and recorded. The new buyers found the poor thing! He was reunited with his owners, but the closet was never the same! 2) BANG BANG! Yes, a Derringer on top of the cabinets, the new buyers found a gun, loaded. Very nice with pearl handle – kind of like dangerous jewelry! 3) Ichabod. Ichabod the Iguana had got loose during the move and the sellers never found him. A month after the new buyers had moved in, the buyer’s 6 year old daughter found him sitting on the window sill in the sun in her room. Ichabod went back to his owners but the little girl never wanted to sleep in her room again! 4) Keep it a Secret - shhhh. The buyers had been in the home for about 3 months when Mrs. Buyer noticed that the full-length mirror in the bathroom had a hinge on the side. She pulled on the mirror and it opened into a large room! No one knew it was there, like Narnia! This room was finished and had electricity – no windows, but carpet and great for storage – yet strange and no beautiful talking lion! 5) The Mole People. This one in the basement, behind the furnace, there was a hidden door – I never would have found it, but it opened into an entire dug out “preppers haven” with shelving and a table used for reloading ammo. It was heated and had carpet on the concrete floor. No windows, but a bracket for a big screen TV. The buyers were thrilled with their find! 6) A Christmas Cache. This home had a special room where they kept fully decorated fake trees ready to just be put out and displayed at Christmas time. They were even on WHEELS! You have heard of “Christmas on Ice” this was Christmas on Wheels! 7) All Bulbed Out. The home was completely dark, and you could tell they only used candles for light. I honestly thought the power was just off, but the fridge worked, and the TV worked. On the second showing, during the daylight, I brought a bulbs and installed, and all the lights worked just fine. How many people does it take to change a light bulb, apparently just one Realtor! 8) Xtra Space for X-Rated. Yup, a crawl space full of them, X rated movies. All VHS! The buyer was asking me what to do with them… like I would know! EBay, Craig’s List – I doubt Bishop’s Attic would take them. LOL 9) Many, Many, Many floors. The house of many floors – but no stairs! This was a fixer, but the buyer called me laughing and asked me to come by. I did, and we saw that there were SEVEN layers of flooring! Old linoleum

Brought to you by squares, glue down indoor-outdoor carpet, another layer of sheet vinyl, a sheet of plywood, ceramic tile, sheet vinyl and then “lick and stick” carpet squares! And the indoor-outdoor carpet was wet! EEEWWW! 10) Love Behind The Walls. The home needed a major remodel when I sold it. As the buyers were tearing out the sheetrock, there were notes written on the studs with hearts and XOXOXO’s and very sweet notes telling her how much he loved her. The original builder had built the home for his sweetheart and left her love notes inside the walls! Aaaw. 11) Pinecone Apocalypse! You all know my opinion of squirrels, just rats with fancy tails! Well, another major renovation on a home that was sold in a “beautiful wooded area”, “A park-like setting”! So this means the squirrels had been stashing pinecone in the kitchen soffits. This is an area in the kitchens that maybe had recessed can lighting or something like that inside. They started pulling the soffit out of the kitchen and a pinecone or two tumbled out – then 5, then 20, then 50, then 100 and they just kept pouring out of the ceiling. Remember the episode on Star Trek with the “Tribbles?’ it was just like that! The never-ending pinecone invasion. 12) Cell Block A. This was a little odd. These sellers had several children, so they took one large room and put up “dividers” like in bathroom stalls, so they were open on the top and the bottom, and made little bedrooms for each kid with a hall down the center. But you could hear EVERYTHING that was going on in each room! They couldn’t see each other but they would talk thru the makeshift plywood walls. The rooms were big enough for a single bed an end table and some walking space. No closet no dresser. Clothes were in boxes under the bed. Walls were painted “battleship grey”. Yup, kind of like a prison! 13) The Traveling Closets. This house was very cute, but I couldn’t find the closet in the master bedroom anywhere. Finally, we were all looking for it and found the long narrow (like 24 inches wide) door and pulled it to open. It didn’t open on a hinge, but it slid out on wheels – and there it was, the closet. We pulled and pulled and pulled and it just kept traveling out of the wall! It was easy to use and hid away quite nicely. The seller said that when she did laundry it was really nice because it was all right there in a large room and not a tiny closet – then it traveled back into wall. 14) One more – The Septic Switch. This was kind of interesting and might be a good idea. The house had a Septic Switch. On even numbered years it was in one position and odd number years the other. How this worked was that this system had 2 drain fields. Each year the seller would go out into the yard and with a special tool turn a lever that would switch from the west leach felid to the east leach field! Each year, a leach field would have a rest for a year! Not quite sure why, but it had been functioning properly for years and years. Okay there you have, the strange, the magnificent, the beautiful and the ingenious!