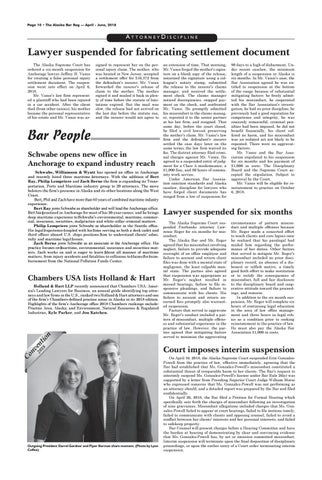 Lawyer suspended for fabricating settlement document The Alaska Supreme Court has ordered a six-month suspension for Anchorage lawyer Jeffrey H. Vance for creating a false personal injury settlement document. The suspension went into effect on April 6, 2018. Mr. Vance’s law firm represented a plaintiff who had been injured in a car accident. After the client died (from other causes), his mother became the personal representative of his estate and Mr. Vance was as-

signed to represent her on the personal injury claim. The mother, who was located in New Jersey, accepted a settlement offer for $16,372 from the defendant’s insurer. Mr. Vance forwarded the insurer’s release of claim to the mother. The mother signed it and mailed it back in plenty of time before the statute of limitations expired. But the mail was slow, the release had not arrived on the last day before the statute ran, and the insurer would not agree to

Schwabe opens new office in Anchorage to expand industry reach Schwabe, Williamson &amp; Wyatt has opened an office in Anchorage and recently hired three maritime ‎attorneys. With the addition of Bert Ray, Philip Lempriere and Zach Berne the firm is expanding its Transportation, Ports and Maritime industry group to 29 attorneys. The move bolsters the firm’s presence in Alaska and its other locations along the West Coast. Bert, Phil and Zach have more than 60 years of combined maritime industry

experience. Bert Ray joins Schwabe as shareholder and will lead the Anchorage office. Bert has ‎practiced in Anchorage for most of his 30-year career, and he brings deep maritime experience to ‎Schwabe’s environmental, maritime, commercial, insurance, securities, malpractice and white collar criminal matters. Philip Lempriere joins Schwabe as shareholder in the Seattle office. His legal ‎experience ‎coupled with his ‎time serving as both a deck cadet and third officer aboard U.S. ships positions ‎him to understand clients’ admiralty and maritime legal ‎issues. Zach Berne joins Schwabe as an associate in the Anchorage office. His practice focuses on ‎maritime, environmental, insurance and securities matters. Zach works on and is eager to learn ‎about all manner of maritime matters, from injury accidents and fatalities to collisions to ‎claims ‎for ‎reimbursement from the National Pollution Funds Center.

an extension of time. That morning, Mr. Vance forged the mother’s signature on a blank copy of the release, notarized the signature using a colleague’s notary stamp, submitted the release to the insurer’s claims manager, and received the settlement check. The claims manager noticed discrepancies, stopped payment on the check, and confronted Mr. Vance. He promptly admitted his misconduct to the claims manager, reported it to the senior partner at his law firm, and resigned. That same day, before the court closed, he filed a civil lawsuit preserving the mother’s claim. Mr. Vance’s law firm and the defendant’s insurer settled the case days later on the same terms; the law firm waived its fee. The district attorney filed criminal charges against Mr. Vance. He agreed to a suspended entry of judgment for a Class A misdemeanor, a $1,000 fine, and 80 hours of community work service. Under American Bar Association sanction standards and Alaska caselaw, discipline for lawyers who have forged client documents has ranged from a low of suspension for

90 days to a high of disbarment. Under recent caselaw, the minimum length of a suspension in Alaska is six months. In Mr. Vance’s case, the Bar Association agreed he was entitled to suspension at the bottom of the range because of substantial mitigating factors: he freely admitted his misconduct, he cooperated with the Bar Association’s investigation, he had no prior discipline, he previously had a good reputation for competence and integrity, he was sincerely remorseful, criminal penalties had been imposed, he did not benefit financially, his client suffered no harm, and his misconduct was an isolated act not likely to be repeated. There were no aggravating factors. Mr. Vance and the Bar Association stipulated to his suspension for six months and his payment of $1,000 in costs. The Disciplinary Board and the Supreme Court accepted the stipulation. Subject to approval by the Court, Mr. Vance will be eligible for reinstatement to practice on October 6, 2018.

Lawyer suspended for six months The Alaska Supreme Court suspended Fairbanks attorney Lawrence Reger for six months for misconduct. The Alaska Bar and Mr. Reger agreed that his misconduct involving neglect, failure to provide adequate oversight of an office employee and failure to account and return client files was done with a mental state of negligence, the least culpable mental state. The parties also agreed that suspension was appropriate as Mr. Reger’s neglect resulted in missed hearings, failure to file responsive pleadings, and failure to communicate with his clients. His failure to account and return unearned fees promptly also warranted suspension. Factors that served to aggravate Mr. Reger’s conduct included a pattern of misconduct, multiple offenses and substantial experience in the practice of law. However, the parties agreed that mitigating factors served to minimize the aggravating

circumstances of pattern misconduct and multiple offenses because Mr. Reger made a concerted effort to reach clients and cure lapses once he realized that his paralegal had misled him regarding the performance of her duties. Other factors that served to mitigate Mr. Reger’s misconduct included no prior disciplinary record, an absence of a dishonest or selfish motive, a timely good faith effort to make restitution or to rectify the consequences of misconduct, full and fair disclosure to the disciplinary board and cooperative attitude toward the proceedings, and remorse. In addition to the six month suspension, Mr. Reger will complete six hours of continuing legal education in the area of law office management and three hours in legal ethics as a condition prior to seeking reinstatement to the practice of law. He must also pay the Alaska Bar Association $1,000 in costs.

Court imposes interim suspension On April 10, 2018, the Alaska Supreme Court suspended Erin GonzalezPowell from the practice of law, effective immediately, agreeing that the Bar had established that Ms. Gonzalez-Powell’s misconduct constituted a substantial threat of irreparable harm to her clients. The Bar’s request to interimly suspend Ms. Gonzalez-Powell’s license under Bar Rule 26(e) was supported by a letter from Presiding Superior Court Judge William Morse who expressed concerns that Ms. Gonzalez-Powell was not performing as an attorney should, and a detailed report was prepared by the Bar and filed confidentially. On April 26, 2018, the Bar filed a Petition for Formal Hearing which specifically sets forth the charges of misconduct following an investigation of nine grievances. Misconduct allegations included charges that Ms. Gonzalez-Powell failed to appear at court hearings, failed to file motions timely, failed to communicate with clients and opposing counsel, failed to avoid a conflict between her clients’ interests and her personal interests, and failed to safekeep property. Bar Counsel will present charges before a Hearing Committee and have the burden at hearing of demonstrating by clear and convincing evidence that Ms. Gonzalez-Powell has, by act or omission committed misconduct. Interim suspension will terminate upon the final disposition of disciplinary proceedings, or upon the earlier entry of a Court order terminating interim suspension.