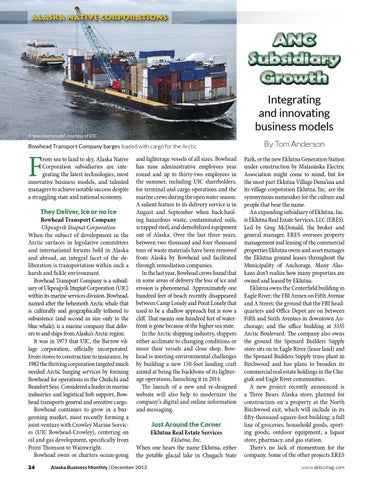 rom sea to land to sky, Alaska Native Corporation subsidiaries are integrating the latest technologies, most innovative business models, and talented managers to achieve notable success despite a struggling state and national economy.

They Deliver, Ice or no Ice Bowhead Transport Company Ukpeaġvik Iñupiat Corporation When the subject of development in the Arctic surfaces in legislative committees and international forums held in Alaska and abroad, an integral facet of the deliberation is transportation within such a harsh and fickle environment. Bowhead Transport Company is a subsidiary of Ukpeaġvik Iñupiat Corporation (UIC) within its marine services division. Bowhead, named after the behemoth Arctic whale that is culturally and geographically tethered to subsistence (and second in size only to the blue whale), is a marine company that delivers to and ships from Alaska’s Arctic region. It was in 1973 that UIC, the Barrow village corporation, officially incorporated. From stores to construction to insurance, by 1982 the thriving corporation targeted much needed Arctic barging services by forming Bowhead for operations in the Chukchi and Beaufort Seas. Considered a leader in marine industries and logistical hub support, Bowhead transports general and sensitive cargo. Bowhead continues to grow in a burgeoning market, most recently forming a joint-venture with Crowley Marine Services (UIC Bowhead-Crowley), centering on oil and gas development, specifically from Point Thomson to Wainwright. Bowhead owns or charters ocean-going 24

and lighterage vessels of all sizes. Bowhead has nine administrative employees year round and up to thirty-two employees in the summer, including UIC shareholders, for terminal and cargo operations and the marine crews during the open water season. A salient feature to its delivery service is in August and September when back-hauling hazardous waste, contaminated soils, scrapped steel, and demobilized equipment out of Alaska. Over the last three years, between two thousand and four thousand tons of waste materials have been removed from Alaska by Bowhead and facilitated through remediation companies. In the last year, Bowhead crews found that in some areas of delivery the loss of ice and erosion is phenomenal. Approximately one hundred feet of beach recently disappeared between Camp Lonely and Point Lonely that used to be a shallow approach but is now a cliff. That means one hundred feet of waterfront is gone because of the higher sea state. In the Arctic shipping industry, shippers either acclimate to changing conditions or moor their vessels and close shop. Bowhead is meeting environmental challenges by building a new 150-foot landing craft aimed at being the backbone of its lighterage operations, launching it in 2014. The launch of a new and re-designed website will also help to modernize the company’s digital and online information and messaging.

Just Around the Corner Eklutna Real Estate Services Eklutna, Inc. When one hears the name Eklutna, either the potable glacial lake in Chugach State

ByTomAnderson Park, or the new Eklutna Generation Station under construction by Matanuska Electric Association might come to mind, but for the most part Eklutna Village Dena’ina and its village corporation Eklutna, Inc. are the synonymous namesakes for the culture and people that bear the name. An expanding subsidiary of Eklutna, Inc. is Eklutna Real Estate Services, LLC (ERES). Led by Greg McDonald, the broker and general manager, ERES oversees property management and leasing of the commercial properties Eklutna owns and asset manages the Eklutna ground leases throughout the Municipality of Anchorage. Many Alaskans don’t realize how many properties are owned and leased by Eklutna. Eklutna owns the Centerfield building in Eagle River; the FBI Annex on Fifth Avenue and A Street; the ground that the FBI headquarters and Office Depot are on between Fifth and Sixth Avenues in downtown Anchorage; and the office building at 3335 Arctic Boulevard. The company also owns the ground the Spenard Builders Supply store sits on in Eagle River (lease land) and the Spenard Builders Supply truss plant in Birchwood and has plans to broaden its commercial real estate holdings in the Chugiak and Eagle River communities. A new project recently announced is a Three Bears Alaska store, planned for construction on a property at the North Birchwood exit, which will include in its fift y-thousand-square-foot building: a full line of groceries, household goods, sporting goods, outdoor equipment, a liquor store, pharmacy, and gas station. There’s no lack of momentum for the company. Some of the other projects ERES www.akbizmag.com 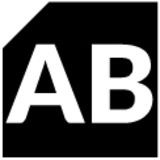