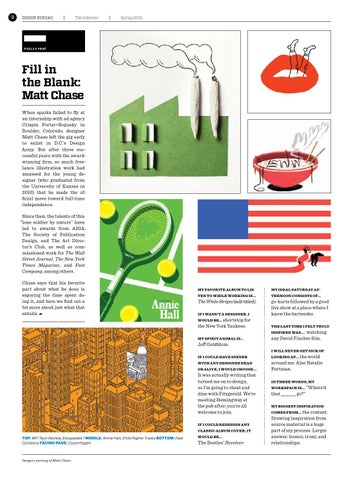 Fill in the Blank: Matt Chase When sparks failed to fly at an internship with ad agency Crispin Porter+Bogusky in Boulder, Colorado, designer Matt Chase left the gig early to enlist in D.C.’s Design Army. But after three successful years with the awardwinning firm, so much freelance illustration work had amassed for the young designer (who graduated from the University of Kansas in 2010) that he made the official move toward full-time independence. Since then, the talents of this “lone soldier by nature” have led to awards from AIGA, The Society of Publication Design, and The Art Director’s Club, as well as commissioned work for The Wall Street Journal, The New York Times Magazine, and Fast Company, among others. Chase says that his favorite part about what he does is enjoying the time spent doing it, and here we find out a bit more about just what that entails. aZ

MY FAVORITE ALBUM TO LISTEN TO WHILE WORKING IS...

IF I WASN’T A DESIGNER, I

WOULD BE… shortstop for the New York Yankees. MY SPIRIT ANIMAL IS...

MY IDEAL SATURDAY AFTERNOON CONSISTS OF...

go-karts followed by a good live show at a place where I know the bartender. THE LAST TIME I FELT TRULY

INSPIRED WAS ... watching any David Fincher film. I WILL NEVER GET SICK OF

IF I COULD HAVE DINNER WITH ANY DESIGNER DEAD OR ALIVE, I WOULD CHOOSE...

It was actually writing that turned me on to design, so I’m going to cheat and dine with Fitzgerald. We’re meeting Hemingway at the pub after; you’re all welcome to join.

LOOKING AT... the world around me. Also Natalie Portman. IN THREE WORDS, MY

Drawing inspiration from source material is a huge part of my process. Larger answer: humor, irony, and relationships. 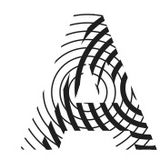