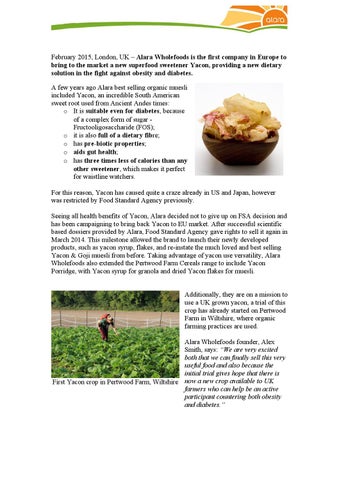 February 2015, London, UK – Alara Wholefoods is the first company in Europe to bring to the market a new superfood sweetener Yacon, providing a new dietary solution in the fight against obesity and diabetes. A few years ago Alara best selling organic muesli included Yacon, an incredible South American sweet root used from Ancient Andes times: o It is suitable even for diabetes, because of a complex form of sugar Fructooligosaccharide (FOS); o it is also full of a dietary fibre; o has pre-biotic properties; o aids gut health; o has three times less of calories than any other sweetener, which makes it perfect for waistline watchers. For this reason, Yacon has caused quite a craze already in US and Japan, however was restricted by Food Standard Agency previously. Seeing all health benefits of Yacon, Alara decided not to give up on FSA decision and has been campaigning to bring back Yacon to EU market. After successful scientific based dossiers provided by Alara, Food Standard Agency gave rights to sell it again in March 2014. This milestone allowed the brand to launch their newly developed products, such as yacon syrup, flakes, and re-instate the much loved and best selling Yacon & Goji muesli from before. Taking advantage of yacon use versatility, Alara Wholefoods also extended the Pertwood Farm Cereals range to include Yacon Porridge, with Yacon syrup for granola and dried Yacon flakes for muesli. Additionally, they are on a mission to use a UK grown yacon, a trial of this crop has already started on Pertwood Farm in Wiltshire, where organic farming practices are used. Alara Wholefoods founder, Alex Smith, says: “We are very excited both that we can finally sell this very useful food and also because the initial trial gives hope that there is First Yacon crop in Pertwood Farm, Wiltshire now a new crop available to UK farmers who can help be an active participant countering both obesity and diabetes.”

Pure Yacon range from Of The Earth Superfoods Organic Yacon Syrup A rich, runny syrup with a deep malty flavour, which is suitable for vegans as well as dieters. Use in the same way as honey, agave or maple syrup.

New & improved recipe from Alara Cereals The Into The Garden Organic Goji & Yacon Muesli features dried Yacon flakes and many superfoods like, Kamut flakes and antioxidants rich Goji berries. This high energy and high fibre mix is based on the original recipe and the brand is happy to bring back this highly popular version again.

Organic Yacon cereal range from The Organic Pertwood Farm Organic Yacon Porridge – A delicious guilt free porridge made with premium organic jumbo oats – sourced directly from the Pertwood Farm then sweetened with yacon. Milled linseeds are added for the extra creaminess and Omega-3 intake. This no added salt/sugar porridge would quickly become everyone’s favourite, including children. Organic Yacon Muesli – An exciting recipe featuring yacon flakes, oats, wholegrains & sweet dried fruits with a sprinkling of healthy fatty acids rich pumpkin and sunflower seeds. Infused with even more superfoods such as mulberries, amaranth and quinoa, all in contribution to overall health. Enjoy this high energy and high fibre blend containing only 158kcal/serving.

Organic Yacon Granola – Toasted to crunchy perfection this granola offers more than flavours and crispiness. Baked with yacon syrup it is lower in calories, whilst still satisfying as a breakfast or an afternoon pick me up. Crispy barley flakes, toasted coconut, protein rich buckwheat and sweet dates create a harmony in this blend. Linseeds and pumpkin seeds just increase the crunchiness. Malty, delicious & moreish. 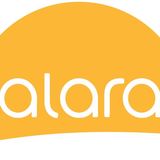 February 2015, London, UK – Alara Wholefoods is the first company in Europe to bring to the market a new superfood sweetener Yacon, providin...

February 2015, London, UK – Alara Wholefoods is the first company in Europe to bring to the market a new superfood sweetener Yacon, providin...