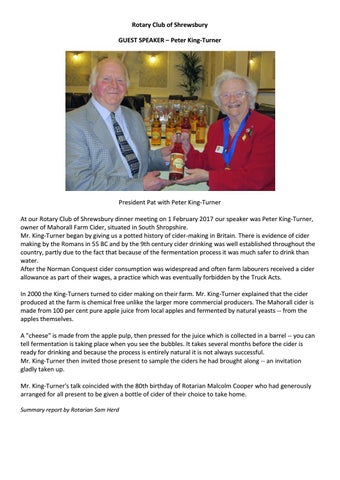 President Pat with Peter King-Turner At our Rotary Club of Shrewsbury dinner meeting on 1 February 2017 our speaker was Peter King-Turner, owner of Mahorall Farm Cider, situated in South Shropshire. Mr. King-Turner began by giving us a potted history of cider-making in Britain. There is evidence of cider making by the Romans in 55 BC and by the 9th century cider drinking was well established throughout the country, partly due to the fact that because of the fermentation process it was much safer to drink than water. After the Norman Conquest cider consumption was widespread and often farm labourers received a cider allowance as part of their wages, a practice which was eventually forbidden by the Truck Acts. In 2000 the King-Turners turned to cider making on their farm. Mr. King-Turner explained that the cider produced at the farm is chemical free unlike the larger more commercial producers. The Mahorall cider is made from 100 per cent pure apple juice from local apples and fermented by natural yeasts -- from the apples themselves. A "cheese" is made from the apple pulp, then pressed for the juice which is collected in a barrel -- you can tell fermentation is taking place when you see the bubbles. It takes several months before the cider is ready for drinking and because the process is entirely natural it is not always successful. Mr. King-Turner then invited those present to sample the ciders he had brought along -- an invitation gladly taken up. Mr. King-Turner's talk coincided with the 80th birthday of Rotarian Malcolm Cooper who had generously arranged for all present to be given a bottle of cider of their choice to take home. Summary report by Rotarian Sam Herd

The Rotary Club of Shrewsbury enjoyed hearing about, and drinking, cider on 1 February 2017 when the speaker was Peter King Turner of Mahora...

The Rotary Club of Shrewsbury enjoyed hearing about, and drinking, cider on 1 February 2017 when the speaker was Peter King Turner of Mahora...