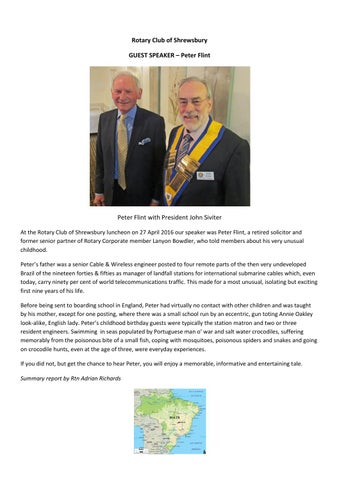 Peter Flint with President John Siviter At the Rotary Club of Shrewsbury luncheon on 27 April 2016 our speaker was Peter Flint, a retired solicitor and former senior partner of Rotary Corporate member Lanyon Bowdler, who told members about his very unusual childhood. Peter’s father was a senior Cable & Wireless engineer posted to four remote parts of the then very undeveloped Brazil of the nineteen forties & fifties as manager of landfall stations for international submarine cables which, even today, carry ninety per cent of world telecommunications traffic. This made for a most unusual, isolating but exciting first nine years of his life. Before being sent to boarding school in England, Peter had virtually no contact with other children and was taught by his mother, except for one posting, where there was a small school run by an eccentric, gun toting Annie Oakley look-alike, English lady. Peter’s childhood birthday guests were typically the station matron and two or three resident engineers. Swimming in seas populated by Portuguese man o’ war and salt water crocodiles, suffering memorably from the poisonous bite of a small fish, coping with mosquitoes, poisonous spiders and snakes and going on crocodile hunts, even at the age of three, were everyday experiences. If you did not, but get the chance to hear Peter, you will enjoy a memorable, informative and entertaining tale. Summary report by Rtn Adrian Richards

The Rotary Club of Shrewsbury luncheon on 27 April 2016 heard a talk by Peter Flint on his childhood in remote parts of Brazil.

The Rotary Club of Shrewsbury luncheon on 27 April 2016 heard a talk by Peter Flint on his childhood in remote parts of Brazil.