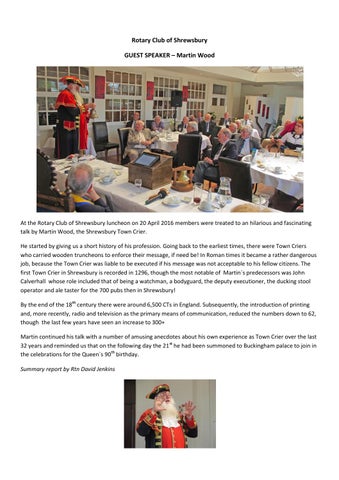 At the Rotary Club of Shrewsbury luncheon on 20 April 2016 members were treated to an hilarious and fascinating talk by Martin Wood, the Shrewsbury Town Crier. He started by giving us a short history of his profession. Going back to the earliest times, there were Town Criers who carried wooden truncheons to enforce their message, if need be! In Roman times it became a rather dangerous job, because the Town Crier was liable to be executed if his message was not acceptable to his fellow citizens. The first Town Crier in Shrewsbury is recorded in 1296, though the most notable of Martin`s predecessors was John Calverhall whose role included that of being a watchman, a bodyguard, the deputy executioner, the ducking stool operator and ale taster for the 700 pubs then in Shrewsbury! By the end of the 18th century there were around 6,500 CTs in England. Subsequently, the introduction of printing and, more recently, radio and television as the primary means of communication, reduced the numbers down to 62, though the last few years have seen an increase to 300+ Martin continued his talk with a number of amusing anecdotes about his own experience as Town Crier over the last 32 years and reminded us that on the following day the 21st he had been summoned to Buckingham palace to join in the celebrations for the Queen`s 90th birthday. Summary report by Rtn David Jenkins