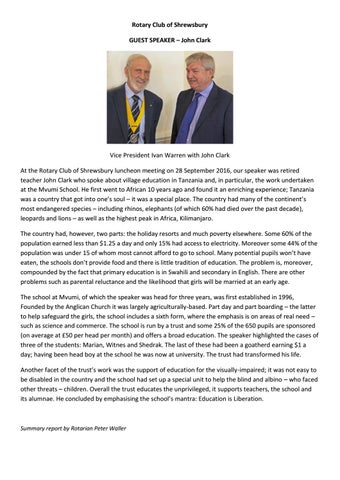 Vice President Ivan Warren with John Clark At the Rotary Club of Shrewsbury luncheon meeting on 28 September 2016, our speaker was retired teacher John Clark who spoke about village education in Tanzania and, in particular, the work undertaken at the Mvumi School. He first went to African 10 years ago and found it an enriching experience; Tanzania was a country that got into one’s soul – it was a special place. The country had many of the continent’s most endangered species – including rhinos, elephants (of which 60% had died over the past decade), leopards and lions – as well as the highest peak in Africa, Kilimanjaro. The country had, however, two parts: the holiday resorts and much poverty elsewhere. Some 60% of the population earned less than $1.25 a day and only 15% had access to electricity. Moreover some 44% of the population was under 15 of whom most cannot afford to go to school. Many potential pupils won’t have eaten, the schools don’t provide food and there is little tradition of education. The problem is, moreover, compounded by the fact that primary education is in Swahili and secondary in English. There are other problems such as parental reluctance and the likelihood that girls will be married at an early age. The school at Mvumi, of which the speaker was head for three years, was first established in 1996, Founded by the Anglican Church it was largely agriculturally-based. Part day and part boarding – the latter to help safeguard the girls, the school includes a sixth form, where the emphasis is on areas of real need – such as science and commerce. The school is run by a trust and some 25% of the 650 pupils are sponsored (on average at £50 per head per month) and offers a broad education. The speaker highlighted the cases of three of the students: Marian, Witnes and Shedrak. The last of these had been a goatherd earning $1 a day; having been head boy at the school he was now at university. The trust had transformed his life. Another facet of the trust’s work was the support of education for the visually-impaired; it was not easy to be disabled in the country and the school had set up a special unit to help the blind and albino – who faced other threats – children. Overall the trust educates the unprivileged, it supports teachers, the school and its alumnae. He concluded by emphasising the school’s mantra: Education is Liberation.

The Rotary Club of Shrewsbury heard a talk by John Clark about Village Education in Tanzania on 28 Sept 2016.

The Rotary Club of Shrewsbury heard a talk by John Clark about Village Education in Tanzania on 28 Sept 2016.