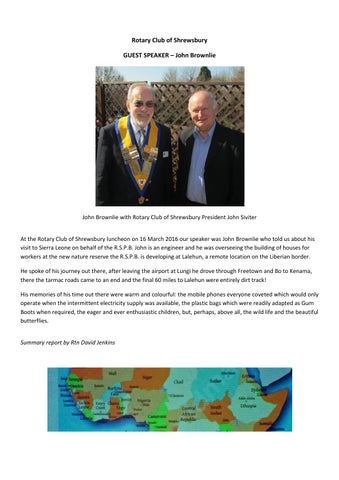 John Brownlie with Rotary Club of Shrewsbury President John Siviter At the Rotary Club of Shrewsbury luncheon on 16 March 2016 our speaker was John Brownlie who told us about his visit to Sierra Leone on behalf of the R.S.P.B. John is an engineer and he was overseeing the building of houses for workers at the new nature reserve the R.S.P.B. is developing at Lalehun, a remote location on the Liberian border. He spoke of his journey out there, after leaving the airport at Lungi he drove through Freetown and Bo to Kenama, there the tarmac roads came to an end and the final 60 miles to Lalehun were entirely dirt track! His memories of his time out there were warm and colourful: the mobile phones everyone coveted which would only operate when the intermittent electricity supply was available, the plastic bags which were readily adapted as Gum Boots when required, the eager and ever enthusiastic children, but, perhaps, above all, the wild life and the beautiful butterflies. Summary report by Rtn David Jenkins