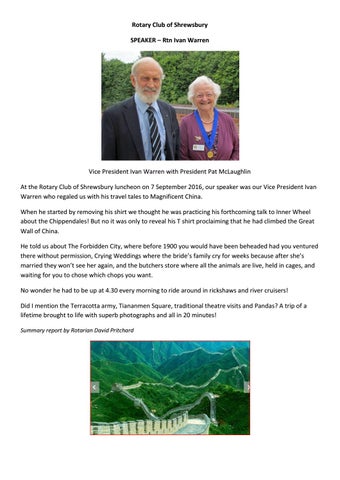 Vice President Ivan Warren with President Pat McLaughlin At the Rotary Club of Shrewsbury luncheon on 7 September 2016, our speaker was our Vice President Ivan Warren who regaled us with his travel tales to Magnificent China. When he started by removing his shirt we thought he was practicing his forthcoming talk to Inner Wheel about the Chippendales! But no it was only to reveal his T shirt proclaiming that he had climbed the Great Wall of China. He told us about The Forbidden City, where before 1900 you would have been beheaded had you ventured there without permission, Crying Weddings where the bride’s family cry for weeks because after she’s married they won’t see her again, and the butchers store where all the animals are live, held in cages, and waiting for you to chose which chops you want. No wonder he had to be up at 4.30 every morning to ride around in rickshaws and river cruisers! Did I mention the Terracotta army, Tiananmen Square, traditional theatre visits and Pandas? A trip of a lifetime brought to life with superb photographs and all in 20 minutes! Summary report by Rotarian David Pritchard