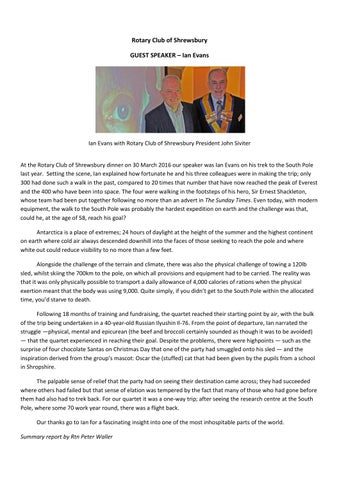 Ian Evans with Rotary Club of Shrewsbury President John Siviter At the Rotary Club of Shrewsbury dinner on 30 March 2016 our speaker was Ian Evans on his trek to the South Pole last year. Setting the scene, Ian explained how fortunate he and his three colleagues were in making the trip; only 300 had done such a walk in the past, compared to 20 times that number that have now reached the peak of Everest and the 400 who have been into space. The four were walking in the footsteps of his hero, Sir Ernest Shackleton, whose team had been put together following no more than an advert in The Sunday Times. Even today, with modern equipment, the walk to the South Pole was probably the hardest expedition on earth and the challenge was that, could he, at the age of 58, reach his goal? Antarctica is a place of extremes; 24 hours of daylight at the height of the summer and the highest continent on earth where cold air always descended downhill into the faces of those seeking to reach the pole and where white out could reduce visibility to no more than a few feet. Alongside the challenge of the terrain and climate, there was also the physical challenge of towing a 120lb sled, whilst skiing the 700km to the pole, on which all provisions and equipment had to be carried. The reality was that it was only physically possible to transport a daily allowance of 4,000 calories of rations when the physical exertion meant that the body was using 9,000. Quite simply, if you didn’t get to the South Pole within the allocated time, you’d starve to death. Following 18 months of training and fundraising, the quartet reached their starting point by air, with the bulk of the trip being undertaken in a 40-year-old Russian Ilyushin Il-76. From the point of departure, Ian narrated the struggle —physical, mental and epicurean (the beef and broccoli certainly sounded as though it was to be avoided) — that the quartet experienced in reaching their goal. Despite the problems, there were highpoints — such as the surprise of four chocolate Santas on Christmas Day that one of the party had smuggled onto his sled — and the inspiration derived from the group’s mascot: Oscar the (stuffed) cat that had been given by the pupils from a school in Shropshire. The palpable sense of relief that the party had on seeing their destination came across; they had succeeded where others had failed but that sense of elation was tempered by the fact that many of those who had gone before them had also had to trek back. For our quartet it was a one-way trip; after seeing the research centre at the South Pole, where some 70 work year round, there was a flight back. Our thanks go to Ian for a fascinating insight into one of the most inhospitable parts of the world. Summary report by Rtn Peter Waller

Ian Evans spoke at the Rotary Club of Shrewsbury on 30 March 2016 about his trek to the South Pole.

Ian Evans spoke at the Rotary Club of Shrewsbury on 30 March 2016 about his trek to the South Pole.