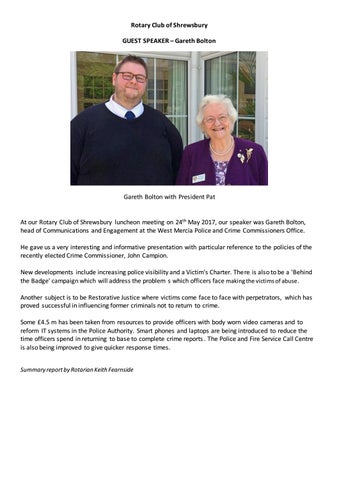 At our Rotary Club of Shrewsbury luncheon meeting on 24th May 2017, our speaker was Gareth Bolton, head of Communications and Engagement at the West Mercia Police and Crime Commissioners Office. He gave us a very interesting and informative presentation with particular reference to the policies of the recently elected Crime Commissioner, John Campion. New developments include increasing police visibility and a Victim's Charter. There is also to be a 'Behind the Badge' campaign which will address the problem s which officers face making the victims of abuse . Another subject is to be Restorative Justice where victims come face to face with perpetrators, which has proved successful in influencing former criminals not to return to crime. Some ÂŁ4.5 m has been taken from resources to provide officers with body worn video cameras and to reform IT systems in the Police Authority. Smart phones and laptops are being introduced to reduce the time officers spend in returning to base to complete crime reports . The Police and Fire Service Call Centre is also being improved to give quicker response times. Summary report by Rotarian Keith Fearnside

The Rotary Club of Shrewsbury gained an insight into the West Mercia Police and Crime Commissioner's role from his Communications chief Gare...

The Rotary Club of Shrewsbury gained an insight into the West Mercia Police and Crime Commissioner's role from his Communications chief Gare...