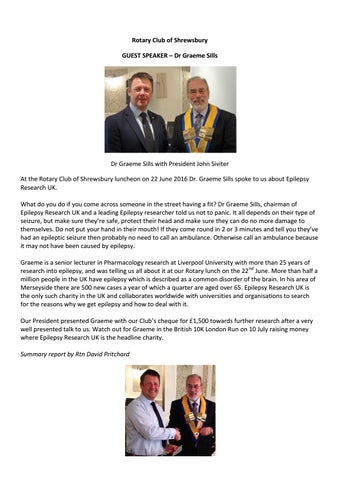 Dr Graeme Sills with President John Siviter At the Rotary Club of Shrewsbury luncheon on 22 June 2016 Dr. Graeme Sills spoke to us about Epilepsy Research UK. What do you do if you come across someone in the street having a fit? Dr Graeme Sills, chairman of Epilepsy Research UK and a leading Epilepsy researcher told us not to panic. It all depends on their type of seizure, but make sure they’re safe, protect their head and make sure they can do no more damage to themselves. Do not put your hand in their mouth! If they come round in 2 or 3 minutes and tell you they’ve had an epileptic seizure then probably no need to call an ambulance. Otherwise call an ambulance because it may not have been caused by epilepsy. Graeme is a senior lecturer in Pharmacology research at Liverpool University with more than 25 years of research into epilepsy, and was telling us all about it at our Rotary lunch on the 22 nd June. More than half a million people in the UK have epilepsy which is described as a common disorder of the brain. In his area of Merseyside there are 500 new cases a year of which a quarter are aged over 65. Epilepsy Research UK is the only such charity in the UK and collaborates worldwide with universities and organisations to search for the reasons why we get epilepsy and how to deal with it. Our President presented Graeme with our Club’s cheque for £1,500 towards further research after a very well presented talk to us. Watch out for Graeme in the British 10K London Run on 10 July raising money where Epilepsy Research UK is the headline charity. Summary report by Rtn David Pritchard

The Rotary Club of Shrewsbury's guest speaker on 22 June 2016 was Dr Graeme Sills, chairman of Epilepsy Research UK which has been one of Pr...

The Rotary Club of Shrewsbury's guest speaker on 22 June 2016 was Dr Graeme Sills, chairman of Epilepsy Research UK which has been one of Pr...