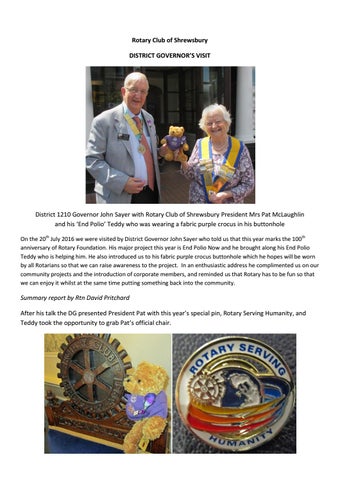 District 1210 Governor John Sayer with Rotary Club of Shrewsbury President Mrs Pat McLaughlin and his ‘End Polio’ Teddy who was wearing a fabric purple crocus in his buttonhole On the 20th July 2016 we were visited by District Governor John Sayer who told us that this year marks the 100th anniversary of Rotary Foundation. His major project this year is End Polio Now and he brought along his End Polio Teddy who is helping him. He also introduced us to his fabric purple crocus buttonhole which he hopes will be worn by all Rotarians so that we can raise awareness to the project. In an enthusiastic address he complimented us on our community projects and the introduction of corporate members, and reminded us that Rotary has to be fun so that we can enjoy it whilst at the same time putting something back into the community.

Rotary District 1210 Governor John Sayer made his official visit to the Rotary Club of Shrewsbury on 20 July 2016.

Rotary District 1210 Governor John Sayer made his official visit to the Rotary Club of Shrewsbury on 20 July 2016.