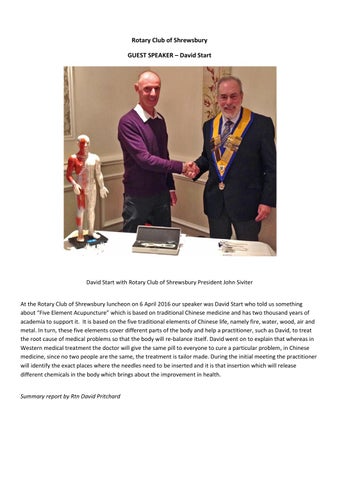 David Start with Rotary Club of Shrewsbury President John Siviter At the Rotary Club of Shrewsbury luncheon on 6 April 2016 our speaker was David Start who told us something about “Five Element Acupuncture” which is based on traditional Chinese medicine and has two thousand years of academia to support it. It is based on the five traditional elements of Chinese life, namely fire, water, wood, air and metal. In turn, these five elements cover different parts of the body and help a practitioner, such as David, to treat the root cause of medical problems so that the body will re-balance itself. David went on to explain that whereas in Western medical treatment the doctor will give the same pill to everyone to cure a particular problem, in Chinese medicine, since no two people are the same, the treatment is tailor made. During the initial meeting the practitioner will identify the exact places where the needles need to be inserted and it is that insertion which will release different chemicals in the body which brings about the improvement in health. Summary report by Rtn David Pritchard