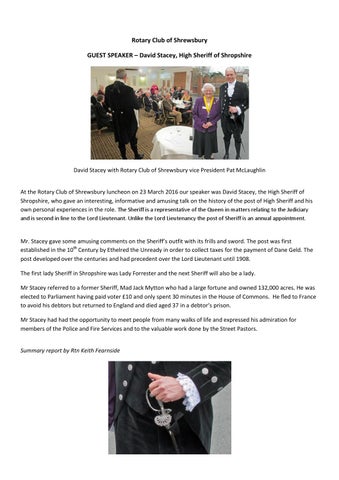 David Stacey with Rotary Club of Shrewsbury vice President Pat McLaughlin At the Rotary Club of Shrewsbury luncheon on 23 March 2016 our speaker was David Stacey, the High Sheriff of Shropshire, who gave an interesting, informative and amusing talk on the history of the post of High Sheriff and his own personal experiences in the role. The Sheriff is a representative of the Queen in matters relating to the Judiciary and is second in line to the Lord Lieutenant. Unlike the Lord Lieutenancy the post of Sheriff is an annual appointment.

Mr. Stacey gave some amusing comments on the Sheriff’s outfit with its frills and sword. The post was first established in the 10th Century by Ethelred the Unready in order to collect taxes for the payment of Dane Geld. The post developed over the centuries and had precedent over the Lord Lieutenant until 1908. The first lady Sheriff in Shropshire was Lady Forrester and the next Sheriff will also be a lady. Mr Stacey referred to a former Sheriff, Mad Jack Mytton who had a large fortune and owned 132,000 acres. He was elected to Parliament having paid voter £10 and only spent 30 minutes in the House of Commons. He fled to France to avoid his debtors but returned to England and died aged 37 in a debtor’s prison. Mr Stacey had had the opportunity to meet people from many walks of life and expressed his admiration for members of the Police and Fire Services and to the valuable work done by the Street Pastors. Summary report by Rtn Keith Fearnside