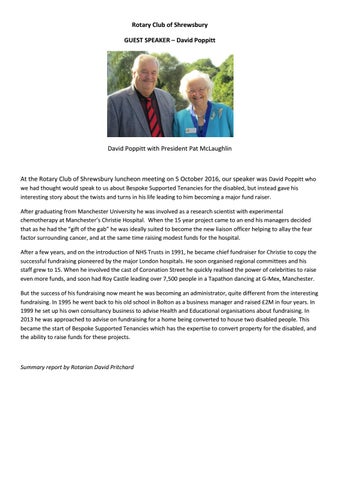 At the Rotary Club of Shrewsbury luncheon meeting on 5 October 2016, our speaker was David Poppitt who we had thought would speak to us about Bespoke Supported Tenancies for the disabled, but instead gave his interesting story about the twists and turns in his life leading to him becoming a major fund raiser. After graduating from Manchester University he was involved as a research scientist with experimental chemotherapy at Manchester’s Christie Hospital. When the 15 year project came to an end his managers decided that as he had the “gift of the gab” he was ideally suited to become the new liaison officer helping to allay the fear factor surrounding cancer, and at the same time raising modest funds for the hospital. After a few years, and on the introduction of NHS Trusts in 1991, he became chief fundraiser for Christie to copy the successful fundraising pioneered by the major London hospitals. He soon organised regional committees and his staff grew to 15. When he involved the cast of Coronation Street he quickly realised the power of celebrities to raise even more funds, and soon had Roy Castle leading over 7,500 people in a Tapathon dancing at G-Mex, Manchester. But the success of his fundraising now meant he was becoming an administrator, quite different from the interesting fundraising. In 1995 he went back to his old school in Bolton as a business manager and raised £2M in four years. In 1999 he set up his own consultancy business to advise Health and Educational organisations about fundraising. In 2013 he was approached to advise on fundraising for a home being converted to house two disabled people. This became the start of Bespoke Supported Tenancies which has the expertise to convert property for the disabled, and the ability to raise funds for these projects.

The Rotary Club of Shrewsbury heard a talk by David Poppitt about his career and Bespoke Supported Tenancies on 5 Sept 2016.

The Rotary Club of Shrewsbury heard a talk by David Poppitt about his career and Bespoke Supported Tenancies on 5 Sept 2016.