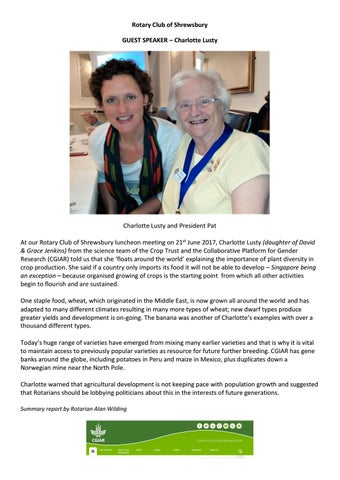 Charlotte Lusty and President Pat At our Rotary Club of Shrewsbury luncheon meeting on 21st June 2017, Charlotte Lusty (daughter of David & Grace Jenkins) from the science team of the Crop Trust and the Collaborative Platform for Gender Research (CGIAR) told us that she ‘floats around the world’ explaining the importance of plant diversity in crop production. She said if a country only imports its food it will not be able to develop – Singapore being an exception – because organised growing of crops is the starting point from which all other activities begin to flourish and are sustained. One staple food, wheat, which originated in the Middle East, is now grown all around the world and has adapted to many different climates resulting in many more types of wheat; new dwarf types produce greater yields and development is on-going. The banana was another of Charlotte’s examples with over a thousand different types. Today’s huge range of varieties have emerged from mixing many earlier varieties and that is why it is vital to maintain access to previously popular varieties as resource for future further breeding. CGIAR has gene banks around the globe, including potatoes in Peru and maize in Mexico, plus duplicates down a Norwegian mine near the North Pole. Charlotte warned that agricultural development is not keeping pace with population growth and suggested that Rotarians should be lobbying politicians about this in the interests of future generations. Summary report by Rotarian Alan Wilding

Rotary Club of Shrewsbury members heard about gene banks for the preservation of varieties of food crops from Charlotte Lusty of the Crop Tr...

Rotary Club of Shrewsbury members heard about gene banks for the preservation of varieties of food crops from Charlotte Lusty of the Crop Tr...