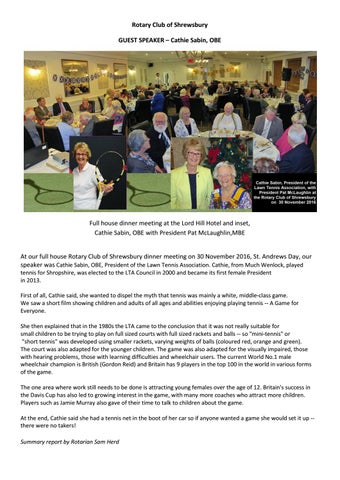 Full house dinner meeting at the Lord Hill Hotel and inset, Cathie Sabin, OBE with President Pat McLaughlin,MBE At our full house Rotary Club of Shrewsbury dinner meeting on 30 November 2016, St. Andrews Day, our speaker was Cathie Sabin, OBE, President of the Lawn Tennis Association. Cathie, from Much Wenlock, played tennis for Shropshire, was elected to the LTA Council in 2000 and became its first female President in 2013. First of all, Cathie said, she wanted to dispel the myth that tennis was mainly a white, middle-class game. We saw a short film showing children and adults of all ages and abilities enjoying playing tennis -- A Game for Everyone. She then explained that in the 1980s the LTA came to the conclusion that it was not really suitable for small children to be trying to play on full sized courts with full sized rackets and balls -- so "mini-tennis" or "short tennis" was developed using smaller rackets, varying weights of balls (coloured red, orange and green). The court was also adapted for the younger children. The game was also adapted for the visually impaired, those with hearing problems, those with learning difficulties and wheelchair users. The current World No.1 male wheelchair champion is British (Gordon Reid) and Britain has 9 players in the top 100 in the world in various forms of the game. The one area where work still needs to be done is attracting young females over the age of 12. Britain's success in the Davis Cup has also led to growing interest in the game, with many more coaches who attract more children. Players such as Jamie Murray also gave of their time to talk to children about the game. At the end, Cathie said she had a tennis net in the boot of her car so if anyone wanted a game she would set it up -there were no takers! Summary report by Rotarian Sam Herd

The Rotary Club of Shrewsbury held a dinner meeting on 30 November 2016 at which the guest speaker was Cathie Sabin, OBE, President of the L...

The Rotary Club of Shrewsbury held a dinner meeting on 30 November 2016 at which the guest speaker was Cathie Sabin, OBE, President of the L...