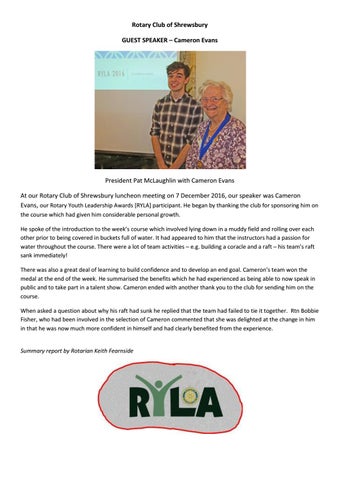 President Pat McLaughlin with Cameron Evans At our Rotary Club of Shrewsbury luncheon meeting on 7 December 2016, our speaker was Cameron Evans, our Rotary Youth Leadership Awards [RYLA] participant. He began by thanking the club for sponsoring him on the course which had given him considerable personal growth. He spoke of the introduction to the week’s course which involved lying down in a muddy field and rolling over each other prior to being covered in buckets full of water. It had appeared to him that the instructors had a passion for water throughout the course. There were a lot of team activities – e.g. building a coracle and a raft – his team’s raft sank immediately! There was also a great deal of learning to build confidence and to develop an end goal. Cameron’s team won the medal at the end of the week. He summarised the benefits which he had experienced as being able to now speak in public and to take part in a talent show. Cameron ended with another thank you to the club for sending him on the course. When asked a question about why his raft had sunk he replied that the team had failed to tie it together. Rtn Bobbie Fisher, who had been involved in the selection of Cameron commented that she was delighted at the change in him in that he was now much more confident in himself and had clearly benefited from the experience.

The Rotary Club of Shrewsbury heard a talk by Cameron Evans on 7 December 2016 about his experiences at the Rotary Youth Leadership Awards i...

The Rotary Club of Shrewsbury heard a talk by Cameron Evans on 7 December 2016 about his experiences at the Rotary Youth Leadership Awards i...