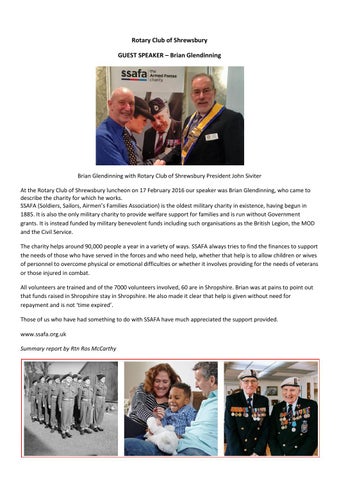 Brian Glendinning with Rotary Club of Shrewsbury President John Siviter At the Rotary Club of Shrewsbury luncheon on 17 February 2016 our speaker was Brian Glendinning, who came to describe the charity for which he works. SSAFA (Soldiers, Sailors, Airmen’s Families Association) is the oldest military charity in existence, having begun in 1885. It is also the only military charity to provide welfare support for families and is run without Government grants. It is instead funded by military benevolent funds including such organisations as the British Legion, the MOD and the Civil Service. The charity helps around 90,000 people a year in a variety of ways. SSAFA always tries to find the finances to support the needs of those who have served in the forces and who need help, whether that help is to allow children or wives of personnel to overcome physical or emotional difficulties or whether it involves providing for the needs of veterans or those injured in combat. All volunteers are trained and of the 7000 volunteers involved, 60 are in Shropshire. Brian was at pains to point out that funds raised in Shropshire stay in Shropshire. He also made it clear that help is given without need for repayment and is not ‘time expired’. Those of us who have had something to do with SSAFA have much appreciated the support provided. www.ssafa.org.uk Summary report by Rtn Ros McCarthy

The Rotary Club of Shrewsbury's guest speaker on 17 February 2016 was Brian Glendinning from SSAFA.

The Rotary Club of Shrewsbury's guest speaker on 17 February 2016 was Brian Glendinning from SSAFA.