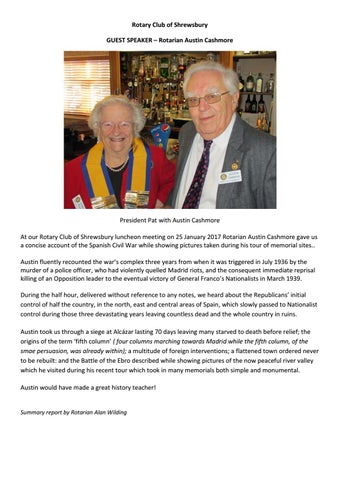 President Pat with Austin Cashmore At our Rotary Club of Shrewsbury luncheon meeting on 25 January 2017 Rotarian Austin Cashmore gave us a concise account of the Spanish Civil War while showing pictures taken during his tour of memorial sites.. Austin fluently recounted the war’s complex three years from when it was triggered in July 1936 by the murder of a police officer, who had violently quelled Madrid riots, and the consequent immediate reprisal killing of an Opposition leader to the eventual victory of General Franco’s Nationalists in March 1939. During the half hour, delivered without reference to any notes, we heard about the Republicans’ initial control of half the country, in the north, east and central areas of Spain, which slowly passed to Nationalist control during those three devastating years leaving countless dead and the whole country in ruins. Austin took us through a siege at Alcázar lasting 70 days leaving many starved to death before relief; the origins of the term ‘fifth column’ ( four columns marching towards Madrid while the fifth column, of the smae persuasion, was already within); a multitude of foreign interventions; a flattened town ordered never to be rebuilt: and the Battle of the Ebro described while showing pictures of the now peaceful river valley which he visited during his recent tour which took in many memorials both simple and monumental. Austin would have made a great history teacher!

The Rotary Club of Shrewsbury enjoyed a talk by Rotarian Austin Cashmore about the Spanish Civil War following his recent tour of memorial s...

The Rotary Club of Shrewsbury enjoyed a talk by Rotarian Austin Cashmore about the Spanish Civil War following his recent tour of memorial s...