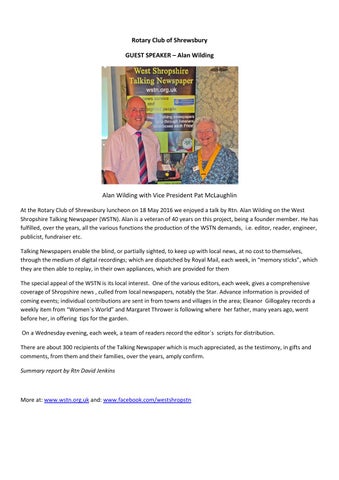 Alan Wilding with Vice President Pat McLaughlin At the Rotary Club of Shrewsbury luncheon on 18 May 2016 we enjoyed a talk by Rtn. Alan Wilding on the West Shropshire Talking Newspaper (WSTN). Alan is a veteran of 40 years on this project, being a founder member. He has fulfilled, over the years, all the various functions the production of the WSTN demands, i.e. editor, reader, engineer, publicist, fundraiser etc. Talking Newspapers enable the blind, or partially sighted, to keep up with local news, at no cost to themselves, through the medium of digital recordings; which are dispatched by Royal Mail, each week, in “memory sticks”, which they are then able to replay, in their own appliances, which are provided for them The special appeal of the WSTN is its local interest. One of the various editors, each week, gives a comprehensive coverage of Shropshire news , culled from local newspapers, notably the Star. Advance information is provided of coming events; individual contributions are sent in from towns and villages in the area; Eleanor Gillogaley records a weekly item from “Women`s World” and Margaret Thrower is following where her father, many years ago, went before her, in offering tips for the garden. On a Wednesday evening, each week, a team of readers record the editor`s scripts for distribution. There are about 300 recipients of the Talking Newspaper which is much appreciated, as the testimony, in gifts and comments, from them and their families, over the years, amply confirm. Summary report by Rtn David Jenkins

After our luncheon on 18 May 2016 we heard a talk from Rotarian Alan Wilding about the West Shropshire Talking Newspaper which has achieved...

After our luncheon on 18 May 2016 we heard a talk from Rotarian Alan Wilding about the West Shropshire Talking Newspaper which has achieved...