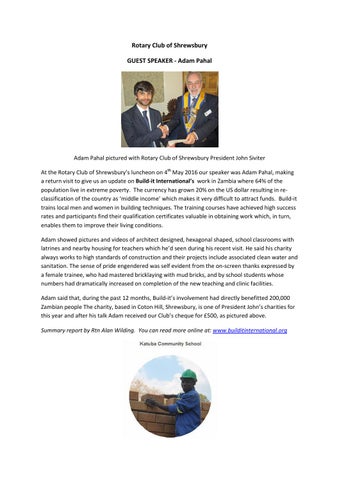 Adam Pahal pictured with Rotary Club of Shrewsbury President John Siviter At the Rotary Club of Shrewsbury’s luncheon on 4th May 2016 our speaker was Adam Pahal, making a return visit to give us an update on Build-it International’s work in Zambia where 64% of the population live in extreme poverty. The currency has grown 20% on the US dollar resulting in reclassification of the country as ‘middle income’ which makes it very difficult to attract funds. Build-it trains local men and women in building techniques. The training courses have achieved high success rates and participants find their qualification certificates valuable in obtaining work which, in turn, enables them to improve their living conditions. Adam showed pictures and videos of architect designed, hexagonal shaped, school classrooms with latrines and nearby housing for teachers which he’d seen during his recent visit. He said his charity always works to high standards of construction and their projects include associated clean water and sanitation. The sense of pride engendered was self evident from the on-screen thanks expressed by a female trainee, who had mastered bricklaying with mud bricks, and by school students whose numbers had dramatically increased on completion of the new teaching and clinic facilities. Adam said that, during the past 12 months, Build-it’s involvement had directly benefitted 200,000 Zambian people The charity, based in Coton Hill, Shrewsbury, is one of President John’s charities for this year and after his talk Adam received our Club’s cheque for £500, as pictured above. Summary report by Rtn Alan Wilding. You can read more online at: www.builditinternational.org

At the Rotary Club of Shrewsbury's luncheon on 4 May 2016 Adam Pahal of Build-it International gave an update on his charity's building and...

At the Rotary Club of Shrewsbury's luncheon on 4 May 2016 Adam Pahal of Build-it International gave an update on his charity's building and...