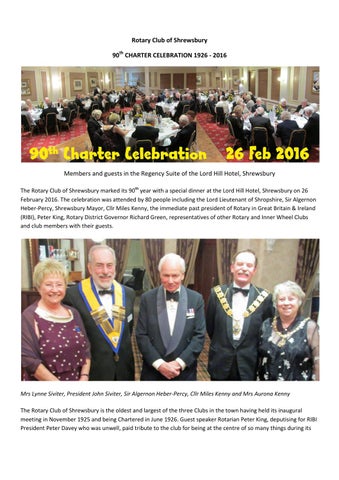 Members and guests in the Regency Suite of the Lord Hill Hotel, Shrewsbury The Rotary Club of Shrewsbury marked its 90th year with a special dinner at the Lord Hill Hotel, Shrewsbury on 26 February 2016. The celebration was attended by 80 people including the Lord Lieutenant of Shropshire, Sir Algernon Heber-Percy, Shrewsbury Mayor, Cllr Miles Kenny, the immediate past president of Rotary in Great Britain & Ireland (RIBI), Peter King, Rotary District Governor Richard Green, representatives of other Rotary and Inner Wheel Clubs and club members with their guests.

Mrs Lynne Siviter, President John Siviter, Sir Algernon Heber-Percy, Cllr Miles Kenny and Mrs Aurona Kenny The Rotary Club of Shrewsbury is the oldest and largest of the three Clubs in the town having held its inaugural meeting in November 1925 and being Chartered in June 1926. Guest speaker Rotarian Peter King, deputising for RIBI President Peter Davey who was unwell, paid tribute to the club for being at the centre of so many things during its

90 years, including youth activities, helping vulnerable and handicapped people plus international healthcare and eradication of polio projects. In proposing a toast to the Club he said: “You are a vibrant club that is committed to serving the community and, on behalf of RIBI, I thank you very much for that.”

Mr King said Rotarians belong to two families, adding: “We’re very fortunate people; we have our own family and we have our Rotary family, not just your club but the great network of Rotarians which I know you enjoy working with and being with.” After referring to the gentler side of Rotary, Peter king read a poem: “If I had my children to raise all over again I would build self esteem first and the house later I would finger paint more and point the finger less I would do less correcting and more connecting I would take my eyes off my watch and watch with my eyes I would care to know less and know to care more I would do more hugging and less tugging I would be firm less and affirm more I would model less about the love of power and more about the power of love.”

He added: “Those are messages that we have in Rotary and we can put them into operation all the time in our care for our community. And I thank you all very much for your contribution that you make to Rotary. We can do so much in the generosity of spirit and in the family of Rotary.”

Mayor of Shrewsbury Cllr Miles Kenny added his congratulations to club members and said: “You do a tremendous job in the community and I think we’re going to call on you more and more in the future.”