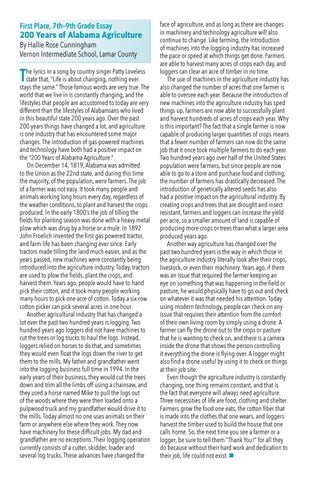 he lyrics in a song by country singer Patty Loveless state that, “Life is about changing, nothing ever stays the same.” Those famous words are very true. The world that we live in is constantly changing, and the lifestyles that people are accustomed to today are very different than the lifestyles of Alabamians who lived in this beautiful state 200 years ago. Over the past 200 years things have changed a lot, and agriculture is one industry that has encountered some major changes. The introduction of gas-powered machines and technology have both had a positive impact on the “200 Years of Alabama Agriculture.” On December 14, 1819, Alabama was admitted to the Union as the 22nd state, and during this time the majority, of the population, were farmers. The job of a farmer was not easy. It took many people and animals working long hours every day, regardless of the weather conditions, to plant and harvest the crops produced. In the early 1800’s the job of tilling the ﬁelds for planting season was done with a heavy metal plow which was drug by a horse or a mule. In 1892 John Froelich invented the ﬁrst gas powered tractor, and farm life has been changing ever since. Early tractors made tilling the land much easier, and as the years passed, new machines were constantly being introduced into the agriculture industry. Today, tractors are used to plow the ﬁelds, plant the crops, and harvest them. Years ago, people would have to hand pick their cotton, and it took many people working many hours to pick one acre of cotton. Today a six-row cotton picker can pick several acres in one hour. Another agricultural industry that has changed a lot over the past two hundred years is logging. Two hundred years ago loggers did not have machines to cut the trees or log trucks to haul the logs. Instead, loggers relied on horses to do that, and sometimes they would even ﬂoat the logs down the river to get them to the mills. My father and grandfather went into the logging business full time in 1994. In the early years of their business, they would cut the trees down and trim all the limbs off using a chainsaw, and they used a horse named Mike to pull the logs out of the woods where they were then loaded onto a pulpwood truck and my grandfather would drive it to the mills. Today almost no one uses animals on their farm or anywhere else where they work. They now have machinery for these difﬁcult jobs. My dad and grandfather are no exceptions. Their logging operation currently consists of a cutter, skidder, loader and several log trucks. These advances have changed the

face of agriculture, and as long as there are changes in machinery and technology agriculture will also continue to change. Like farming, the introduction of machines into the logging industry has increased the pace or speed at which things get done. Farmers are able to harvest many acres of crops each day, and loggers can clear an acre of timber in no time. The use of machines in the agriculture industry has also changed the number of acres that one farmer is able to oversee each year. Because the introduction of new machines into the agriculture industry has sped things up, farmers are now able to successfully plant and harvest hundreds of acres of crops each year. Why is this important? The fact that a single farmer is now capable of producing larger quantities of crops means that a fewer number of farmers can now do the same job that it once took multiple farmers to do each year. Two hundred years ago over half of the United States population were farmers, but since people are now able to go to a store and purchase food and clothing, the number of farmers has drastically decreased. The introduction of genetically altered seeds has also had a positive impact on the agricultural industry. By creating crops and trees that are drought and insect resistant, farmers and loggers can increase the yield per acre, so a smaller amount of land is capable of producing more crops or trees than what a larger area produced years ago. Another way agriculture has changed over the past two hundred years is the way in which those in the agriculture industry literally look after their crops, livestock, or even their machinery. Years ago, if there was an issue that required the farmer keeping an eye on something that was happening in the ﬁeld or pasture, he would physically have to go out and check on whatever it was that needed his attention. Today using modern technology, people can check on any issue that requires their attention from the comfort of their own living room by simply using a drone. A farmer can ﬂy the drone out to the crops or pasture that he is wanting to check on, and there is a camera inside the drone that shows the person controlling it everything the drone is ﬂying over. A logger might also ﬁnd a drone useful by using it to check on things at their job site. Even though the agriculture industry is constantly changing, one thing remains constant, and that is the fact that everyone will always need agriculture. Three necessities of life are food, clothing and shelter. Farmers grow the food one eats, the cotton ﬁber that is made into the clothes that one wears, and loggers harvest the timber used to build the house that one calls home. So, the next time you see a farmer or a logger, be sure to tell them “Thank You!” for all they do because without their hard work and dedication to their job, life could not exist.  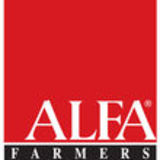