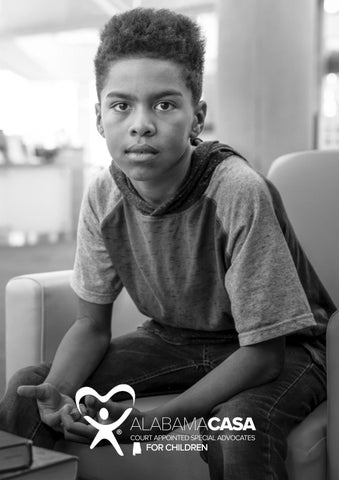 “Life’s most persistent and urgent question is,

What are you doing for others?” — Dr. Martin Luther King, Jr.

WHAT IS ALABAMA CASA NETWORK? When a child enters the child welfare system because his or her home is no longer safe, a judge may appoint a Court Appointed Special Advocate, or CASA Volunteer, to advocate for the best interests of the child in court and other settings. CASA volunteers advocate, protect, and support children in need. The Alabama CASA Network encompasses both local and statewide initiatives. At the local level, Alabama CASA provides the hands-on work of recruiting, screening, training, and supervising dedicated volunteers. At the state level, Alabama CASA provides financial support, technical support and services, as well as guidance and quality assurance to help the local programs operate effectively and have the resources to seek out the best possible volunteers.

In an overburdened social welfare system, abused and neglected children can slip through the cracks. At this time, the Alabama CASA Network can serve fewer than 10% of these children per year. TOGETHER WE WILL

CASA DO? CASA volunteers make a tremendous difference for children. CASA volunteers donate their time and act as the independent â&amp;#x20AC;&amp;#x153;eyes and earsâ&amp;#x20AC;? of the court, investigate in the field, and speak solely for the interests of the child.

P R O T E C T S U P P O R T A DVO C AT E A CASA volunteer brings a measure of consistency to the life of an abused or neglected child, which is otherwise characterized by constant change, uncertainty, and fear.

conduct, and remain in school

CASA volunteers are deeply committed and

specially trained to advocate for each child’s

best interest and in how to get those interests met by the child welfare system. By becoming a CASA volunteer, you can help keep abused and neglected children safe, giving them a chance at happiness. CASA volunteers bring urgency to a child’s needs, both in and out of the courtroom, and promote safety, permanency, and well-being by making independent recommendations. CASA volunteers are individuals from all walks of life who speak up for a child’s best interests in court. A CASA volunteer is not a foster parent, but he or she is a voice making a real difference at a critical point in the child’s life. TOGETHER WE WILL

To become a CASA volunteer visit,

This project was supported by Subgrant #18-VA-VS-003 awarded by the Law Enforcement Traffic Safety Divison of ADECA and the U.S. Department of Justice. The opinions, findings, and conclusions or recommendations expressed in this publication/program/exhibition are those of the author(s) and do not necessarily reflect the views of the Department of Justice or grant-making component.