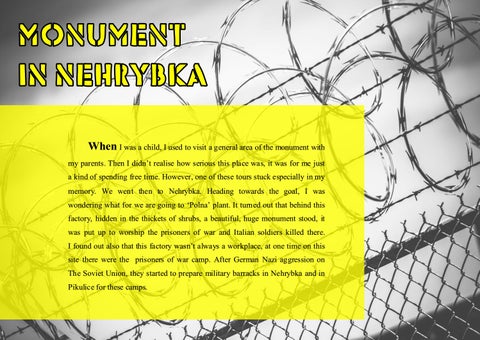 MoNuMeNt In nEhRyBkA When I was a child, I used to visit a general area of the monument with my parents. Then I didn’t realise how serious this place was, it was for me just a kind of spending free time. However, one of these tours stuck especially in my memory. We went then to Nehrybka. Heading towards the goal, I was wondering what for we are going to ‘Polna’ plant. It turned out that behind this factory, hidden in the thickets of shrubs, a beautiful, huge monument stood, it was put up to worship the prisoners of war and Italian soldiers killed there. I found out also that this factory wasn’t always a workplace, at one time on this site there were the prisoners of war camp. After German Nazi aggression on The Soviet Union, they started to prepare military barracks in Nehrybka and in Pikulice for these camps.

It was two hemitrope camps subordinated to the command in Jarosław as a Stalag 327. In the initial phase the camp in Nehrybka had an area of 4 hectares and existed until the 10th of July 1944. It was surrounded by double barbed wire. Prisoners were in 12 bunk building and in barracks. From the beginning of existence, it means from July 1941 to summer 1943 in the camp there were present The Soviet Union’s prisoners. Next few days there were Dutch’ prisoners. Finally since October 1943 to spring 1944 there were only Italian prisoners. After transporting them to Italy, there were only The Soviet Union’s prisoners, until the end of existence. The exact number of the average population of the camp is difficult to predict due to the constant fluctuation of the prisoners. According to the testimony of the witnesses, it should be remembered that during the period of the camp, 1000 prisoners passed by it.

captives were at entire physical

damage. They describe their appearance as “ they looked like skeletons, they moved with immense effort but their behavior showed that they were completely deprived of power “. Epidemic disease was endemic. Mortality was high. The carts exported a dozen of remains every day. Italian soldiers stayed in an individual camp in Nehrybka.

Those Captives appeared in the streets of

Przemyśl in autumn 1943. After so called "betrayal" of marshal Badoglio. They transpoted

them to Bakończyce station and then moved them to Pikulice.

Witnesses testified that Italians were neatly dressed and they behaved with elegance in time when they were being moved through the streets of town. Women and children handed them eatables. Intern Italians were put away in Nehrybka in autumn 1943. This camp numbered about 4 000 people. They were treated like Soviet captives. Italian soldiers who in 1943 refused to fight on the German side were treated cruelly. Starving, beating and others form of abusing Italians brought them disease and big mortality. Decedents were buried in two places about 2 km away from the camp. Italian captives were executed by firing squad too. In the camps in Nehrybka and Pikulice about 5-6 thousands Italians stayed . Those physically weak and sick on epidemic diseases died in winter 1943/1944. Archivist sources claim that there were one general officer and 54 colonels in the camps.

and Nehrybka belonged to the camps with a

stricter regime. Italian officers, in spite of conducted propaganda, for the fascist Italian army of the republic of Salo, formed a secret anti-fascist , distinctly royalist organization in the camp. The function of the older camp was performed by the colonel Luigi de Micheli. Among the officers there was a large group of young officers after the first appointment, interrogated before the oath. In spite of the help given to Italians by the surrounding rural population and local organizations of the Polish resistance, the Italian prisoners were dying of hunger, diseases, harassment,as well as the executions which took place around 100 m from the camps in the post-Austrian forts, in the Jewish cemetery in PrzemyĹ&#x203A;l and nearby forests. The Italian prisoners who arrived in the winter and spring of 1944 were taken away in an unknown direction.

the main commission for the study of Nazi crimes conducted

detailed examinations in connection with the conducted investigation to determine the traces of the Italian prisoners in the both camps. Partial exhumation was performed. The fact that uniforms had no details, dead bodies were without uniforms made it impossible to identify any prisoners both Soviet and Italian soldiers .Judge Barciszewski who conducted the investigation using the most comperative criteria put forward in his study conclusions that in those camps about 1,000 Italian prisoners died.

that all murders on war prisoners have

been committed according to the same plan and had an analogous course. They were organized in a satiety defined manner according to discussed instructions and were thoughtful work of the greatest political and military authorities of the Third Reich . In this way the horrific facts of the extermination of prisoners of war

were added to the history of

a number of Soviet soldiers,

prisoners of war, and Italian soldiers who had refused to participate in the fight against the Soviet Union in the Przemyśl, Pikulice and Nehrybka camps" The monument built on the site of mass extermination is a symbol of the fraternity of the nation's and of the bloodshed " For our and your freedom ". Małgorzata from Przemyśl